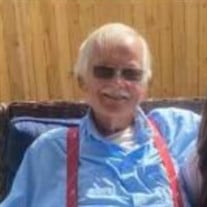 MARSHALLVILLE – Ross Lamar Beamon, Sr., 75, passed away peacefully on Wednesday, April 21, 2021, after an extended illness. Services will be held on Sunday, April 25, 2021, at First Baptist Church of Perry. Visitation will begin at 2:00 p.m., and the Funeral will begin at 3:00 p.m. Entombment will be in the Dogwood Mausoleum in Perry Memorial Gardens immediately following the service. In lieu of flowers, the family respectfully requests memorial contributions to First Baptist Church of Perry House of God Fund, 1105 Main Street, Perry, GA 31069, or GA Plant Food Educational Society, P. O. Box 1383, Commerce, GA 30529. Lamar was born in Americus to the late Ross and Annie Williams Beamon. He grew up in Leslie, attended Lee County High School, and graduated from Union High School. He continued his education at Macon Junior College where he received an Associate’s Degree in Business Administration. Lamar met and married the love of his life, Shirley Beamon. He proudly served our country in the U.S. Army Reserves and the Georgia National Guard. Once the couple started having children, Lamar traded his time with the National Guard for time with his family. He was a long-time sales representative of agricultural products with Martin Marietta for twenty-eight years. He eventually started his own company, Southeast Lime and Stone, to do the same. A lifetime member of Georgia Plant Food Educational Society, he was a former President and was the recipient of the Blair Davis Award, among other special awards through the years. Lamar was a member of First Baptist Church of Perry and the Avon Buice Sunday School class. He enjoyed fishing, was an avid hunter, and looked forward to his annual fishing trip to Lake Okeechobee, Florida, and his bi-annual dove hunting trip to South America. Springtime started his fishing, and he always said, “When a dogwood tree blooms, the fish start biting.” Lamar loved being outdoors and nothing delighted him more than spending time with his grandchildren and riding his John Deere Tractors around his property. His passion was his family, and they will dearly miss him. Left to cherish the memories they made with Lamar are his loving and devoted wife of fifty-five years, Shirley Payne Beamon of Perry; his daughter, Sharon R. Beamon of Perry; his son and daughter-in-law, Marty and Amy Beamon of Marshallville; his grandchildren who lovingly referred to him as “PawPaw,” Landon Beamon and Cassidy “Scoot” Beamon, both of Tuscaloosa; his siblings, Clayton Beamon (Sharon) of Pine Mountain, Cecil Beamon of Snellville, Barbara Johnson (Raymond) of Braselton, and Allen Beamon (Nancy) of Leesburg; his sisters-in-law, Martha Beamon and Janice Beamon; and several nieces and nephews. He was preceded in death by his parents and his brothers, Russell Beamon, Ralph “Dean” Beamon, and Donald Beamon. Condolences for the family may be left in the online guestbook at www.watsonhunt.com. Watson-Hunt Funeral Home has been entrusted with the arrangements.

MARSHALLVILLE &#8211; Ross Lamar Beamon, Sr., 75, passed away peacefully on Wednesday, April 21, 2021, after an extended illness. Services will be held on Sunday, April 25, 2021, at First Baptist Church of Perry. Visitation will begin at 2:00... View Obituary & Service Information

The family of LAMAR BEAMON created this Life Tributes page to make it easy to share your memories.

Send flowers to the BEAMON family.