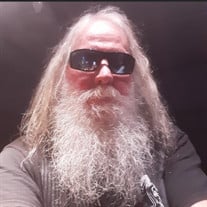 *** PLEASE NOTE TIME CHANGE *** PERRY – William Kenneth “Bear” Baxley, 65, passed away peacefully after being hospitalized in Louisiana and courageously battling Covid. Services will be held on Wednesday, September 29, 2021. Visitation will begin at 2:00 p.m. at Watson-Hunt Funeral Home. As Bear requested, a procession will leave the funeral home at 3:30 p.m. with motorcycles leading the way to Perry Memorial Gardens where Bear will be laid to rest with his parents. The Graveside Service will begin at 4:00 p.m. in Perry Memorial Gardens. Friends planning to attend are encouraged to wear their favorite Harley-Davidson outfit or an Allman Brothers t-shirt. Also, friends will be able to put Harley-Davidson or Allman Brothers stickers on the casket or write a special message to Bear on the outside of the casket. Markers will be provided. There will be ample room to spread out at the cemetery, so friends may bring a lawn chair if desired. Ken was born in Macon to the late Joel H. Baxley, Sr. and the late Jean Burnette Baxley. He grew up working hard, playing hard, and loving music. He learned to play acoustic and electric guitars at an early age and played in Whiskey River Band for several years during the 1970’s and early 80’s. They played at various locations in Middle Georgia and always had a hundred or more of “their closest friends” join them. Bear worked on motorcycles and was a mechanic at S & E Cycles for years. He went to school and earned his Commercial Driver’s License (CDL) and drove a car hauler cross-country for a while. Ken always loved the beach, and he moved to Lakeland, Florida, and opened a small Harley-Davidson Repair and Custom build shop that he owned and operated for about ten years before moving back to Perry. Through the years, Bear loved a challenge and was thrilled to meet his goals. He furthered his education in several areas and became certified to be a Taxidermist, a Gunsmith, and even graduated from Central Georgia Tech with a diploma in Construction Management. He continued to enjoy singing, especially Karaoke, and gathering with his friends. He renewed his CDL and had been driving a long-haul truck for the past three years with Epes. Sadly, he was on a trip for work when he became ill and stopped for help in Louisiana. Bear had always said he wanted a motorcycle parade at his funeral, and that is what he will have. Ken was preceded in death by his parents; his daughter, Tandy Burdette; and his brothers, Bobby Baxley and Joe Baxley. Left to cherish the memories they made with Bear are his five grandchildren; his sister, Vickie Altman of Perry; his special “family members,” Tommy Anderson of West Palm Beach, FL, Ricky Powers, Mark Zammitt, and Ramal Lancaster, all of Perry; and many nieces, nephews, great-nieces, and great-nephews. Please leave special memories and words of comfort in the online guestbook at www.watsonhunt.com. Watson-Hunt Funeral Home has been entrusted with the arrangements.

The family of KEN "BEAR" BAXLEY created this Life Tributes page to make it easy to share your memories.

Send flowers to the BAXLEY family.