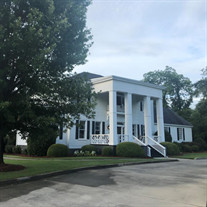 HAYNESVILLE – Henry Keith Padgett, 64, passed away peacefully on Tuesday, July 6, 2021, after an extended illness. Services will be held on Friday, July 9, 2021, at First Baptist Church of Haynesville, with the Visitation beginning at 1:00 p.m. and the Funeral starting at 2:00 p.m. Interment will be in the church cemetery immediately following the service. In lieu of flowers, the family respectfully requests memorial contributions to First Baptist Church of Haynesville, 2953 US Hwy 341, Hawkinsville, GA 31036, or Perry FFA, c/o Kyle Dekle, 1307 North Avenue, Perry, GA 31069. Keith was born in Hawkinsville to the late E.C. and Ruby Woodard Padgett. He was a 1975 Graduate of Perry High School. Keith was hired to work in the warehouse at Pabst Brewing Company when it opened, enjoyed his job and work family for nearly twenty years. When his boys were growing up, he was truly a hands-on dad, especially with their livestock projects for 4-H and FFA – pigs, cows, and sheep – that they housed at their home through each show season. Keith would make the annual trip to Indiana to pick up the pigs for his kids and others with whom his kids were friends. Whatever they needed, he was there to help. He was instrumental in developing local livestock shows and would volunteer year after year, even once his sons had graduated from high school. Keith loved seeing the students succeed and receive rewards for their hard work. He has been a long-time member and supporter of Houston County Young Farmers Association, where he encouraged young people and their families to support local farmers and the agriculture industry. Keith was a member of First Baptist Church of Haynesville for many years and was a member of Tubby Fowler’s Sunday School Class. After the brewery closed, Keith spent time with some friends who helped him begin his second career in the forestry business. He began as a logger loading and hauling trees that had been cut to the lumber companies. As his experience and knowledge of the business grew, so did his responsibilities. Keith retired after thirty-plus years as a Master Timber Harvester and a Crew Leader. He found great joy in the peace and quiet of nature in the forests, reporting to work, and while cruising timber in the later years. Keith’s family remembers him as the most caring and tender-hearted man they ever knew. His love for his family shined bright, especially when the grandchildren came along. Keith was preceded in death by his parents and his brother, Charles Padgett, Jr. Left to cherish the memories they made with Keith are his loving and devoted wife of forty-seven years, Cindy Oliver Padgett of Haynesville; his sons, Shawn Padgett of Kathleen and Kyle Padgett (Jennifer) of Chattanooga, TN; his grandchildren, Caleb Padgett, Haley Padgett, Southerly Padgett, Grayson Padgett, and Jasmine Williams (his bonus granddaughter); his sister, Kathy Chambers of Bonaire; and several nieces and nephews. Condolences for the family may be left in the online guestbook at www.watsonhunt.com. Watson-Hunt Funeral Home has been entrusted with the arrangements.

HAYNESVILLE &#8211; Henry Keith Padgett, 64, passed away peacefully on Tuesday, July 6, 2021, after an extended illness. Services will be held on Friday, July 9, 2021, at First Baptist Church of Haynesville, with the Visitation beginning at... View Obituary & Service Information

The family of KEITH PADGETT created this Life Tributes page to make it easy to share your memories.

Send flowers to the PADGETT family.