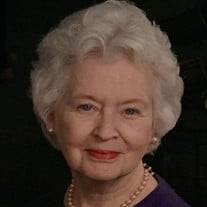 WARNER ROBINS – Kathryn “Kaye” Keene Johnson, 82, formerly of Big Canoe, GA, passed away peacefully early in the morning on Thursday, March 26, 2020. The family will gather at Perry United Methodist Church for a private funeral service. A Graveside Service at Old City Cemetery in Covington will be held in June where she will be laid to rest with her beloved husband, Jerry. Arrangement details will be announced prior to the service. In lieu of flowers, the family respectfully requests memorial contributions to Alzheimer’s Association, 886 Mulberry Street, Macon, GA 31201 or The Methodist Home for Children and Youth, 304 Pierce Avenue, Macon, GA 31204. Kaye was born and raised in Atlanta. She married the love of her life, Jerry Johnson, and they lived in Big Canoe, Georgia, for many years. She had a long and successful career as a legal secretary for the attorneys at Sutherland, Asbill, and Brennan, driving herself to downtown Atlanta every day, for over 40 years. Kaye was a proficient multitasker and was appreciated and treasured by her employers, co-workers, and clients. After 51 years of marriage, raising their children, and living life to its fullest, her darling Jerry passed away after a brief illness, and she found herself needing to be with family more and more. She moved to Perry in 2011 to be near her son. Kaye was a member of Perry United Methodist Church. She enjoyed her time in Perry and made many new friends. As time passed, however, the dreadful disease that gradually stole her memories and her mind advanced more and more, and she was able to live the last six years of her life in a safe, caring, and happy environment. While her family has been missing her “old self” for several years, all those who knew and loved her will forever miss her dearly. She was preceded in death by her parents, C.D. and Lola Keene; her husband; a brother, Richard Keene; and her sister, Brenda Hicks. Left to cherish the memories they made with Kaye are her daughter and son-in-law, Beth and Scott Titlow of Dacula; her son and daughter-in-law, Michael and Jennifer Johnson of Perry; her grandchildren, Laura Morgan (Allen), Keene Johnson (Leah), Kathryn Johnson, and Abigail Johnson; her brother, Chuck Keene; and several nieces and nephews. Condolences for the family may be left in the online guestbook at www.watsonhunt.com. Watson-Hunt Funeral Home has been entrusted with the arrangements.

The family of Kathryn "Kaye" Keene Johnson created this Life Tributes page to make it easy to share your memories.

Send flowers to the Johnson family.