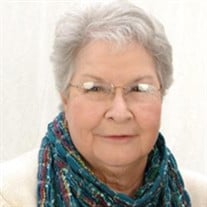 Judith Elaine “Judy” Odom Poss, 78, passed away peacefully on Wednesday, November 4, 2020, after a courageous battle with Idiopathic Pulmonary Fibrosis. All services will be held on Tuesday, November 17, 2020. The visitation will begin at 10:00 a.m. and the funeral service will begin at 11:00 a.m. at First Baptist Church of Haynesville. Interment will be at 2:00 p.m. in Andersonville National Cemetery. Memorial contributions may be made to St. Jude Children’s Research Hospital, 501 St. Jude Place, Memphis, TN 38105. Judy was born in Caryville, Tennessee, to the late William and Eathel Hamaker Odom, the youngest of eight children, all of whom predeceased her. She grew up in Toledo, Ohio, and graduated from Woodward High School. She married the love of her life, James Edward Poss, Sr., in 1958. While he served our country in the U.S. Navy, Judy was a wonderfully supportive and very proud wife, engaging in activities with other enlisted couples. They raised their children moving to various locations with the Navy, yet still remained solid in their marriage, as they were for over sixty-two years. After they settled in Perry, Judy participated with the local VFW Ladies’ Auxiliary, serving as President for twenty-four years. She led the group with such grace and stability, she was even elected LAVFW Outstanding President six different years. Judy was a loving and nurturing lady all of her life. Known as “Nana Judy” to so many, she thoroughly enjoyed keeping children in her home for over thirty years. She always felt that she and her husband, “Papa Jim,” were truly caring for each of the kids while their parents worked, helping to raise them in a loving and welcoming environment. She delighted in teaching them manners and sharing, Christian values, and the joys of friendship while they were in her home. Each of those families became extended family members with Nana Judy and her own family. Judy was very active in her church home, First Baptist Church of Haynesville, where she was a member, and through the years served in various capacities including Director of WMU, Banner Ministry Director, Cubbies Director, and Sunday School Teacher. Nana Judy will sincerely be missed by all those who knew and loved her. Left to cherish the memories they made with Nana Judy are her loving and devoted husband of over sixty-two years, James “Papa Jim” Poss; her children, James “Eddie” Poss, Jr. (Carolyn), Kathy Poss Cleveland, Linda Poss Overly (Mark), and Chris Poss; her grandchildren, James Poss, III, Anne Elizabeth Joseph, David M. Poss, Jason Overly, Amber McCarty, Audry Porter, Ryan Cleveland, and Logan Poss; her great-grandchildren, Isaiah Overly, Abigail Poss, Ryan Overly, Sydnee Poss, Morrigan Poss, McKenna Everage, Colton Everage, Keagen Everage, Mark E. Porter, Nikki Porter, Timmy Porter, Sara Dingman, Megan Sanders, and Tyler McCarty; great-great-grandchildren, Benjamin Dingman, Easton Sanders, and Maddox Sanders; many nieces and nephews; and a host of other special children. Judy was preceded in death by her grandson, Sam Poss; her son-in-law, Rodney Cleveland; two brothers; and five sisters. Condolences for the family may be left in the online guestbook at www.watsonhunt.com. Watson-Hunt Funeral Home has been entrusted with the arrangements.

Judith Elaine &#8220;Judy&#8221; Odom Poss, 78, passed away peacefully on Wednesday, November 4, 2020, after a courageous battle with Idiopathic Pulmonary Fibrosis. All services will be held on Tuesday, November 17, 2020. The visitation will... View Obituary & Service Information

The family of JUDY POSS created this Life Tributes page to make it easy to share your memories.

Send flowers to the POSS family.