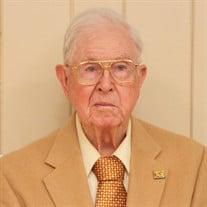 PERRY – Joseph Jackson “Jack” Pitts, Jr., 95, passed away peacefully on Tuesday, December 1, 2020, after a long and fulfilling life. Graveside Services will be held on Wednesday, December 9, 2020, at 11:00 a.m. in Deep Bottom Cemetery in Norman Park, Georgia, with Reverend Glenn Jakes officiating. In lieu of flowers, memorial contributions may be made to Perry Presbyterian Church, P. O. Box 574, Perry, GA 31069. Jack was born in Tampa, Florida, to the late Joseph Jackson Pitts, Sr., and Maude Elizabeth Reynolds Pitts. He grew up in Norman Park, Georgia, near Moultrie on the family farm where he worked for a while after high school. Jack proudly joined and served our country in the U. S. Army during World War II, landed on Utah Beach on D-Day, June 6, 1944, and fought in Patton’s Army. Upon his return, Jack took a job with Civil Service at Robins Air Force Base in 1951 and moved to Houston County, finally settling in Perry in 1956. He worked as an Electronics Specialist and retired after twenty-eight years of service. Jack was a long-time member of Perry Presbyterian Church and was a former member of the American Legion. Left to cherish the memories they made with Jack are his caring and giving church friends; his neighbors that he had through the years; and the many caregivers who have tended to his declining-health needs in these last few months of his life. Jack was preceded in death by his parents; his brother, George Henry Pitts; and his beloved wife, Annabelle Shearer Bogue Pitts. Condolences may be left in the online guestbook at www.watsonhunt.com. Watson-Hunt Funeral Home has been entrusted with the arrangements.

The family of JOSEPH JACKSON "JACK" PITTS JR created this Life Tributes page to make it easy to share your memories.

Send flowers to the PITTS family.