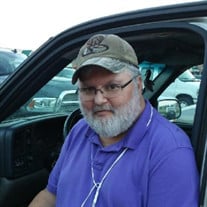 PERRY – Rev. Johnny Lee Sammons, 52, passed away unexpectedly on Wednesday, June 2, 2021. Services will be held on Saturday, June 5, 2021, in the Chapel at Watson-Hunt Funeral Home, with the Visitation starting at 1:00 p.m. and the Funeral beginning at 2:00 p.m. with Rev. Wayne Holcomb officiating. Interment will be in the Cemetery at First Baptist Church of Haynesville immediately following the services. Johnny was born in Princeton, West Virginia, and moved to Perry, Georgia, with his family when he was 12 years old. He was a 1986 graduate of Perry High School, married the love of his life, Susan Funderburk, and received an Associate’s Degree in Avionics. Johnny worked at Robins Air Force Base with Civil Service as an airframe and power plant mechanic. His mission was to serve God and serve others, which he did in so many different ways. He was a Messianic who loved the Lord, was an evangelical minister, enjoyed preaching and teaching, and founded Jubilee Missions. Johnny enjoyed working with Native Americans, building churches on their Reservations in Arizona and New Mexico. Johnny’s Huntin’ Heroes donated animals to be processed and supplied meat to those hungry and in need. He loved being outside, hunting, fishing, camping, and floating down the river. Johnny enjoyed his farm and the animals that followed him around. He spent a great deal of time working on old hot rod cars with his kids, teaching them the fundamentals of mechanics while at the same time making priceless memories with his boys. Spending time with his family gave Johnny great joy, as it did for them, and they will miss his kindness and laughter every day until they are reunited in Heaven. Left to cherish the memories they made with Johnny are his loving and devoted wife of thirty-six years, Susan Funderburk Sammons of Perry; his sons, Jesse Lee Sammons and Matthew James Sammons, both of Perry; his grandson, Jackson Lee Sammons; his mother, Bonnie Sammons of Perry; his brother, Robert Sammons of Perry; and several nieces, nephews, and cousins. Johnny was preceded in death by his father, Lee Sammons. Condolences for the family may be left in the online guestbook at www.watsonhunt.com. Watson-Hunt Funeral Home has been entrusted with the arrangements.

PERRY &#8211; Rev. Johnny Lee Sammons, 52, passed away unexpectedly on Wednesday, June 2, 2021. Services will be held on Saturday, June 5, 2021, in the Chapel at Watson-Hunt Funeral Home, with the Visitation starting at 1:00 p.m. and the Funeral... View Obituary & Service Information

The family of JOHNNY SAMMONS created this Life Tributes page to make it easy to share your memories.

Send flowers to the SAMMONS family.