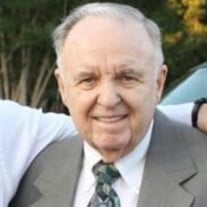 PERRY – Colonel Johnnie Jackson Foreman, Jr., U.S. Army (Ret.), passed away peacefully in his sleep on Sunday, October 3, 2021. He was 88. The family will receive friends on Thursday, October 7, 2021, from 4:00 until 6:00 p.m. at Watson-Hunt Funeral Home. Graveside Services will be held on Friday, October 8, 2021, at 4:00 p.m. in Woodlawn Cemetery. In lieu of flowers, the family respectfully requests memorial contributions to The Westfield School, P.O. Box 2300, Perry, GA 31069, or First Baptist Church of Perry, 1105 Main Street, Perry, GA 31069, or Southside Baptist Church, 1040 South Houston Lake Road, Warner Robins, GA 31088, or St. Jude Children’s Research Hospital, 501 St. Jude Place, Memphis, TN 38105, or The Michael J. Fox Foundation for Parkinson’s, P.O. Box 5014, Hagerstown, MD 21741-5014. Johnnie, also known to many as “Jack,” was born on February 22, 1933, in Marshallville, GA, to the late Johnnie Jackson Foreman, Sr., and the late Madge Griggs Foreman. In 1934, his family purchased and moved into Houston County’s historic Bryan Plantation, also known as “Mulberry Grove.” A 1950 graduate of Warner Robins High School, he attended Georgia Military College and earned a Bachelor’s Degree in Economics at Mercer University. Johnnie had been smitten with one special young lady since grade school, Mary Lynn Watson, and he got to marry her - the love of his life. The couple made their home in Perry where they lived and eventually raised their only child. He proudly joined the U.S. Army Reserves as a First Lieutenant and soon volunteered to serve on active duty in the U.S. Army, which he did for two years until his return to reserve status. During his thirty-year career in the U.S. Army Reserves, Johnnie worked as an officer at Robins Air Force Base, spending a good amount of time at the Pentagon in Washington, D.C. Johnnie received various medals of accommodation through the years and was honored and proud to retire with the rank of Colonel. A long-time, self-made, successful businessman, he served on various committees throughout the community and was a long-time member of First Baptist Church of Perry. Johnnie was a founder of The Westfield School and served on the Board of Directors for several years. He loved Westfield and the Christian values and morals on which it was built. His gifts of appreciation to the school have always been generous, including the school’s first “luxury” Greyhound bus for long-distance sporting events and field trips. But to Johnnie, there was no greater gift than the quality education that his daughter, grandchildren, and so many other students have received at Westfield since it opened. Johnnie had so much fun tailgating and going to Georgia Bulldog football games – celebrating wins and fussing about losses. He loved his family dearly; delighted in playing with his grandchildren; and avidly watched Wheel of Fortune, Jeopardy, and the Atlanta Braves, often with them all sharing in the excitement of the competition or the game. Johnnie was preceded in death by his parents and his sister, Marlene Foreman Thomas. Left to cherish all of the wonderful memories they made with Johnnie are his loving and devoted wife of sixty-nine years, Mary Lynn Watson Foreman of Perry; his beloved daughter and son-in-law, Camilla Foreman “Cam” and Harvey Sabine of Pueblo West, Colorado; a special nephew, Kevin and Kimm Brookshire of Cheyenne, Wyoming ; his treasured grandchildren, Amanda “Mandy” Hart of Perry, Matthew Hart of Dubuque, Iowa, and Caitlin and Army Sgt. Christopher “Chris” Moncrief of Fairbanks, Alaska; his great-grandchildren, Kendall Moncrief and Landon Moncrief; his sister and brother-in-law, Faye and Ronnie Harper of Perry; his brothers-in-law, John Thomas (Diane) of Milledgeville, and Leon Watson, Jr. (Linda) of Perry; his sister-in-law, Georgia Ann Frank of Cheyenne, Wyoming; and several other nieces, nephews, great-nieces, and great-nephews. The family asks that friends leave messages detailing special memories and fun times or share pictures in the online guestbook at www.watsonhunt.com. Watson-Hunt Funeral Home has been entrusted with the arrangements.

The family of JOHNNIE JACKSON FOREMAN, JR. created this Life Tributes page to make it easy to share your memories.