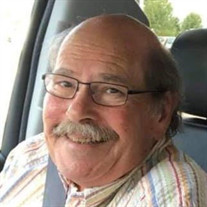 PERRY – John David “Johnny” Moore, 64, passed away peacefully late Saturday night, April 25, 2020, after an extended illness. A Private Graveside Service will be held for the family in Ft. Valley in Oaklawn Cemetery this week. In lieu of flowers, the family respectfully asks that donations please be made to Watson-Hunt Funeral Home, P.O. Box 52, Perry, GA 31069, to help cover the funeral expenses. Johnny was born in downtown Perry, like many others, in Dr. Gallemore’s office. He grew up in Perry and graduated from Perry High School in the Class of 1973. Johnny began a career selling insurance by joining his father, and eventually his brothers, at Moore Insurance Agency. He always knew that Perry would be where he would raise his own family one day, and he did just that. He married the love of his life, Vivian Chapman. After working in insurance for over 10 years, he decided to make a change, took on a new line of work, got his Real Estate license, and began working for an exemplary realtor, Mrs. Watson Richardson, at Richardson Realty. Upon her retirement, Johnny worked with the Frees at Richardson-Free Realty after they purchased the business, and eventually ended up after a brief hiatus from real estate back with the Free family at Coldwell-Banker Robbins and Free Realty. He enjoyed the interaction with so many people looking to buy and sell houses. In fact, Johnny always enjoyed visiting and talking with people wherever he was – be it on the phone or in person. He would often take his daughter to the grocery store and spend lots of time with anyone he happened to encounter discussing the latest headlines of his small hometown of Perry, where he knew almost everyone. Johnny was definitely blessed with the “gift of gab.” He was a life-long member of Perry Presbyterian Church where he was a former Deacon. He was preceded in death by his mother, Joan Moore. Left to cherish the memories they made with Johnny are his loving and devoted wife of 40 years, Vivian Chapman Moore; his son and daughter-in-law, Max and Sydney Moore of Perry; his daughter, Nancy Moore of Perry; one granddaughter, Lydia-Michelle Moore; his father, Herbert Moore of Perry; his brothers and sisters-in-law, Dan and Ann Moore, Mike and Amy Moore, and Bob and Kerri Moore, all of Perry; and several nieces and nephews. Condolences for the family may be left in the online guestbook at www.watsonhunt.com. Watson-Hunt Funeral Home has been entrusted with the arrangements.

The family of JOHN D. "JOHNNY" MOORE created this Life Tributes page to make it easy to share your memories.

Send flowers to the MOORE family.