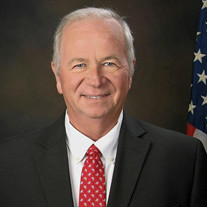 PERRY – James E. “Jimmy” Faircloth, Jr., 60, passed away unexpectedly after injuries sustained in a motorcycle accident on Tuesday, November 16, 2021. A Memorial Service will be held on Saturday, November 20, 2021, at 11:00 a.m. at Perry United Methodist Church with Rev. Tom Carruth officiating. In lieu of flowers, the family respectfully requests memorial contributions to The Westfield School, P. O. Box 2300, Perry, GA 31069. Jimmy was born in Dawson to the late James E. Faircloth, Sr. and the late Mariflyn Bridges Faircloth. He grew up in Americus and graduated from Southland Academy in 1979. He continued his education at Georgia Southwestern College where he received a Bachelor’s Degree in Computer Information Science and also in Accounting. He soon moved to Perry and began his thirty-year career in banking, starting at SunTrust Bank, working for Bank of Perry for many years, and finishing his career with several years at Synovus Bank. Jimmy worked with Parrish Construction for nine years and was elected Mayor of Perry, Georgia, during that time. Once his duties as Mayor increased, he accepted a position with Central Georgia Technical College as the Assistant Vice President of Facilities, Grounds, and Maintenance. Jimmy was a very actively involved parent when his son was in school at Westfield, serving in various capacities with The Booster Club and helping in any area when needed. He was the President of Perry Area Chamber of Commerce and worked on various committees through the years. Jimmy was a long-time member of Perry Rotary Club and was recognized as a Paul Harris Fellow. He served on the Board of Directors at Houston Medical Center for nearly ten years and was Former Chairman. Jimmy was a member of Perry United Methodist Church where he taught all ages of Sunday School and served on various committees including the Administrative Board and the Financial Committee. Later in life, Jimmy joined the Warner Robins Chapter of the Rolling Thunder where he enjoyed serving with friends and honoring Veterans, particularly POWs and MIAs. Jimmy was preceded in death by his parents; a sister, Mariflyn Hatfield; and his companion, Mendy Joiner. Survivors include Jimmy’s son, Mitchell Faircloth of Perry; two sisters, Leesa DaCosta of Athens, and Susan Scott (Jarrod) of Winder; and several nieces and nephews. Watson-Hunt Funeral Home has been entrusted with the arrangements.

The family of JIMMY FAIRCLOTH JR created this Life Tributes page to make it easy to share your memories.

Send flowers to the FAIRCLOTH family.