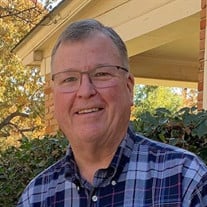 William James Sexton, Jr., 65, passed away peacefully on Thursday, August 27, 2020, surrounded by his loving family. Everyone is invited to participate in a safe-distance visitation by remaining in the comfort of your vehicle as you drive through the circle driveway at Watson-Hunt Funeral Home to express love and support for his family on Sunday, August 30, 2020, from 5:00 p.m. until 7:00 p.m. Graveside Services for anyone who would like to attend will be on Monday, August 31, 2020, at 10:00 a.m. at Evergreen Cemetery in Perry. If you feel like you are at risk, please wear a facial covering. If you feel sick or have symptoms of an illness, please view the funeral on the Watson-Hunt Funeral Home’s Facebook page. In lieu of flowers, the family respectfully requests memorial contributions to Perry United Methodist Church, Family Life Center Building Fund, 1002 Carroll Street, Perry, GA, 31069 or The Westfield School, P.O. Box 2300, Perry, GA 31069. A lifelong resident of Perry, Jim graduated from The Westfield School with the Class of 1973, continued his education at Georgia Southern College, and earned a Bachelor’s Degree in Business in 1977. While in college, Jim met the love of his life, Vickie Harbin, and they married in 1979. Upon their return to his hometown, Jim began work for his father and grandfather at Davis Oil Company. He and his brothers eventually took over the family business that had been a middle Georgia staple since 1946. He was a long-time member of Perry United Methodist Church, having served on the Board of Trustees, as well as the Family Life Center Building Committee. He was also a long-time member of the Perry Rotary Club where he was named Rotarian of the Year numerous times. Jim was active in the community, serving in the past as a Board Member for the Westfield Schools and the Chamber of Commerce. He loved cooking meals for the Perry Police Department and first responders to thank them for their service. A proud patriot, Jim loved his country, and often showed his patriotism by saying, “God Bless America” after the “Amen” to each meal’s blessing. He thoroughly enjoyed entertaining, as was evident by the gatherings hosted at his home, The Buzzard’s Roost, and Perry’s own “White House.” For years, he and his brothers strategically placed Christmas decorations all around Ball Street’s “White House,” creating a winter wonderland for children to delight in the Christmas spirit. Known as “Bo” to his grandchildren, he loved watching them play sports. They always bonded over their love for Georgia football and the Atlanta Braves. Jim was most passionate about his family – loving them, caring for them, and having fun with them. His kind heart will never be forgotten, and his legacy of love, compassion, and generosity will be treasured by so many. Those left to cherish the memories they made with Jim are his loving and devoted wife of forty-one years, Vickie Harbin Sexton of Perry; his mother, Mrs. Billie Davis Sexton of Perry; his children, William James “Will” Sexton, III (Kelly) of Perry, Blair Sexton Greene (Ernest) of Decatur, and Nola Sexton Taunton (Andrew) of Perry; his grandchildren, William James “Liam” Sexton, IV, Conner Sexton, Miles Greene, Sid Greene, and “little girl” Taunton – due to make her arrival in December. Also surviving are Jim’s brothers and sisters-in-law, Davis and Diane Cosey, Mayo and Jeannie Sexton, and Colton and Thelma Sexton; and many wonderful cousins, nieces, and nephews. Jim was preceded in death by his father, William James “Bill” Sexton, Sr. Condolences for the family may be left in the online guestbook at www.watsonhunt.com. Watson-Hunt Funeral Home has been entrusted with the arrangements.

William James Sexton, Jr., 65, passed away peacefully on Thursday, August 27, 2020, surrounded by his loving family. Everyone is invited to participate in a safe-distance visitation by remaining in the comfort of your vehicle as you drive through... View Obituary & Service Information

The family of JIM SEXTON created this Life Tributes page to make it easy to share your memories.

Send flowers to the SEXTON family.