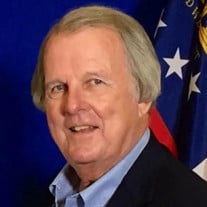 KATHLEEN – James Henry Goodwin passed away peacefully during the evening of Monday, September 13, 2021, after an extended illness. The family will receive friends on Thursday, September 16, 2021, from 4:00 until 6:00 p.m. in the Family Life Center at Perry United Methodist Church. Private Graveside Services will be held in Perry Memorial Gardens. In lieu of flowers, the family respectfully requests memorial contributions to the Perry United Methodist Church 1002 Carroll Street, Perry, GA 31069, or The Westfield School, P.O. Box 2300, Perry, GA 31069. Jim was born in Atlantic City, New Jersey, but he grew up in Miami, Florida. He was the son of Henry Wescott Goodwin and Sally Mulhaul Goodwin. Jim attended the University of Miami and Georgia Southern University where he played baseball and was a member of Kappa Alpha Order. He was drafted by the Philadelphia Phillies and later traded to the Atlanta Braves where, for several years, he played in their farm system. Upon graduation from college with a degree in Criminal Justice, Jim worked in the State Prison System in Savannah, Georgia, as a Psychologist and Recreational Director. Jim and Joye then decided to return to Perry to raise their children among family and friends. He accepted a position with G. Heileman Brewing Company, and he worked there until its closing. He spent his last years working at The Sports Center in Perry, Georgia. Jim loved hunting, fishing, and playing golf with family and friends. He loved his KA brothers and staying in touch with them and their families. Jim always looked after his daughters, their friends, his sisters-in-law, and his nieces whom he loved as his own. He coached many girls’ softball teams at Ochlahatchee Park where his daughters participated, and for two years he helped coach baseball at The Westfield School. He was proud to have been a part of the Hornets’ first baseball state championship team. Jim was a member of The Perry United Methodist Church and the Christadelphian Sunday School Class. Jim was well known among his friends and family for his honest, straight-forward advice, and he was most proud to have raised two successful daughters with the help of his extended family, The Perry United Methodist Church, and The Westfield School. He delighted in being called Biggie by his granddaughters, nieces, nephews, and their friends. Jim was preceded in death by his parents; his infant son, Richard Wescott Goodwin; his sister, Sally Waterhouse; and his father-in-law, Richard Talton. His memory will forever be cherished by his loving wife of 51 years, Joye Talton Goodwin; his children, Angela Elizabeth Goodwin and Ashley and Art McSwain; his granddaughters, Katherine Elizabeth and Molly James McSwain; his sisters and brothers-in-law, Jean and Jim Floyd and Richilynn and Ed Chapman; his nieces and nephews, Jamie and Nick Ayers, Emily Jane and John Dennis Wetherington, and Katie Chapman; his mother-in-law, Elizabeth Talton; and his great-nieces and great-nephews, John Henry and Elizabeth Jane Wetherington, and James Talton, Mary Floyd, and Charles West Ayers. Condolences for the family may be left in the online guestbook at www.watsonhunt.com. Watson-Hunt Funeral Home has been entrusted with the arrangements.

KATHLEEN &#8211; James Henry Goodwin passed away peacefully during the evening of Monday, September 13, 2021, after an extended illness. The family will receive friends on Thursday, September 16, 2021, from 4:00 until 6:00 p.m. in the Family... View Obituary & Service Information

The family of JIM GOODWIN created this Life Tributes page to make it easy to share your memories.

Send flowers to the GOODWIN family.