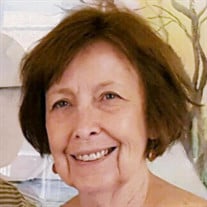 PERRY – Jerry Dean Lasseter Moody, 79, passed away peacefully with loving family by her side on March 1, 2021, after an extended illness. She went home to be with her Lord and Savior. Services will be held on Friday, March 5, 2021, at 2:00 p.m. in the Chapel at Watson-Hunt Funeral Home. Interment will be in Perry Memorial Gardens immediately following the service. Anyone who would like is welcome to attend. Considering the current pandemic, please observe social distancing and wear a mask when possible for the safety of everyone there. In lieu of flowers, the family respectfully requests memorial contributions to Alzheimer’s Association, 886 Mulberry Street, Macon, GA 31201, or WROC (Women Reaching Our Community), PO Box 438, Perry, GA 31069. Jerry was born in Perry to the late Rufus Aldene and Christine Young Lasseter. She was a 1959 graduate of Perry High School, and has maintained a close relationship with her school classmates. She always enjoyed attending her high school reunions. Jerry met and married the love of her life, William Thomas Moody. While Tom was enlisted in the U. S. Air Force, the couple moved to various locations where he was stationed including Louisiana, Hawaii, and Georgia. Jerry worked with Civil Service as an Administrative Assistant in the Test Wing Commander’s Offices. She retired after thirty years of service. The couple lived in Ft. Walton Beach, Florida, for a total of thirty years where they enjoyed retirement. Jerry was raised and saved in Perry Presbyterian Church. For many years, she, along with her sisters, also attended the Mary Ann Hunt Circle Bible Study at the Presbyterian Church. Jerry had a close and personal relationship with the Lord. Everyone that knew her saw the love of Christ through her by the way she lived and the love and kindness she showed to her family and friends, and even strangers. According to Tom, Jerry was the perfect wife. Although she had a career outside the home, she was truly a homemaker at heart. She worked hard to create a nurturing and loving environment in which to raise their children. Kindness radiated from Jerry to everyone she knew. Jerry and Tom were always willing to open their home to people who needed a place to stay for a month, 6 months, or even a year. Jerry enjoyed hosting the annual family Christmas party which always provided so much fun playing games and savoring the family favorite Fincher’s Barbecue and Brunswick Stew. The memories she helped create for her children, grandchildren, and extended family members will be treasured forever. The family would like to offer a special “Thanks” to the staff of Visiting Angels and especially to Kindred Hospice for the kind, compassionate, and sincere love shown to Jerry and her family. Left to cherish the memories they made with Jerry are her loving and devoted husband of 58 years, Tom Moody of Perry; her children, Tommy Moody, Jr. (Lessa) of Tifton, and Mark Moody of Perry; her grandchildren, Erin Trexler (Luke), Logan Moody, Makenzie Moody, Nikki Salinas; four great-grandchildren, including the latest addition to the family, named for Jerry, Jackson Dean Trexler. Jerry is also survived by her siblings, Al Lasseter (Andrea), Leah Lasseter Lockerman, and Candi James (Mark), all of Perry; and several nieces, nephews, and cousins. Jerry was preceded in death by her parents. Condolences for the family may be left in the online guestbook at www.watsonhunt.com. Watson-Hunt Funeral Home has been entrusted with the arrangements.

PERRY &#8211; Jerry Dean Lasseter Moody, 79, passed away peacefully with loving family by her side on March 1, 2021, after an extended illness. She went home to be with her Lord and Savior. Services will be held on Friday, March 5, 2021, at... View Obituary & Service Information

The family of JERRY LASSETER MOODY created this Life Tributes page to make it easy to share your memories.

Send flowers to the MOODY family.