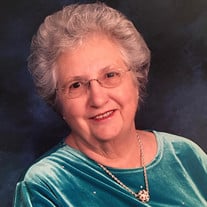 PERRY - Erma Jean Saxon Nation passed away unexpectedly at home on December 28, 2019. Jean was a beloved wife, mother, grandmother, great-grandmother, sister, and friend. She was born February 21, 1935, in Elbert County, Georgia, to the late Eddie Frank Saxon and the late Martha Olivia Grimes Saxon. She married her beloved husband, Harold Ward Nation, in June of 1951 and celebrated 67 years of marriage before his death. As a longtime resident of Perry, GA, she was known and loved by the community and spent many years as a bookkeeper for Walker-Rhodes Tractor Company. She loved working in her garden and was always eager to share the labor of her love with her friends and family. Jean will best be remembered for the kindness that she showed to everyone she met and the sacrifices that she made for her family. Jean is survived by her son, Harold Douglas Nation (Luci) of Perry; her daughters, Alice Gay Nation (Frank Brinkman) of Muncie, IN, and Vickie Carol Graham (Eugene) and Donna Lynne Watson (Julian), both of Perry. Also left to cherish the memories they made with Jean are six grandsons, six great-grandsons, and three great-granddaughters. She is also survived by her siblings, Mildred Burt, Mary Adkins, and Eddie Frank Saxon, Jr. Her wings were ready, but our hearts were not. Funeral Services will be held Monday, December 30, 2019, at 11:00 a.m. in the Chapel at Watson-Hunt Funeral Home. Visitation will be held at 10:00 a.m. Interment will be in Perry Memorial Gardens immediately following the service. Condolences for the family may be left in the online guestbook at www.watsonhunt.com. Watson-Hunt Funeral Home has been entrusted with the arrangements.

The family of Jean Saxon Nation created this Life Tributes page to make it easy to share your memories.

Customized sympathy cards. Mailed for you.