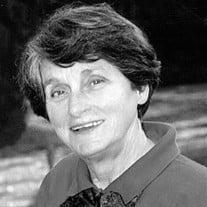 Jean Methvin Gilbert, 91, passed away on April 23, 2019. A funeral service will be held at 11 a.m. on Thursday, April 25, 2019, at Perry United Methodist Church, Perry, Ga.; visitation will be one hour prior to service in Fellowship Hall. Interment will be in Evergreen Cemetery. Jean was born December 10, 1927, in Macon, Georgia, to the late Richard Eugene Methvin and the late Dorothy Harvey Methvin. She grew up in Jeffersonville and graduated from Georgia Women’s College in Milledgeville with a biology education degree. On December 31, 1947 she married Robert Woodrow Gilbert, Sr. who predeceased her in 1999 after 51 years of marriage. They raised four sons in Elko, Georgia, where she was a homemaker. Jean was a member of the Perry United Methodist Church, the Susanna Wesley Class, and the Sorelle Club. She was also a member of the founding Board of Trustees of The Westfield School, a volunteer with Meals on Wheels, and an avid bridge player. Her passions for gardening and cooking provided flowers and meals for all those she loved. Survivors include her sons, Robert W. Gilbert, Jr., M.D. (Joan) of Atlanta, Richard E. Gilbert of Perry, Gary W. Gilbert (June) of Grayson and Harvey E. Gilbert (Maria) of Perry; her brother William J. Methvin (Cynthia) of Jeffersonville; five grandchildren, Richard Gilbert (Julia), Russell Gilbert (Gayle), Amy Celio (Mark), William Gilbert (Molly), Mary Margaret Gilbert; and four great grandchildren. The family request no flowers and that memorials be made to the Carlyle Memory Care Unit, 5300 Zebulon Road, Macon, Ga. 31210, Perry United Methodist Church, 1001 Carroll Street, Perry, Ga. 31069, or Kindred Hospice, Warner Robins, Georgia. Condolences for the family may be left in our online guestbook at www.watsonhunt.com. Watson-Hunt Funeral Home has been entrusted with the arrangements.

Jean Methvin Gilbert, 91, passed away on April 23, 2019. A funeral service will be held at 11 a.m. on Thursday, April 25, 2019, at Perry United Methodist Church, Perry, Ga.; visitation will be one hour prior to service in Fellowship Hall. Interment... View Obituary & Service Information

The family of Jean Methvin Gilbert created this Life Tributes page to make it easy to share your memories.

Send flowers to the Gilbert family.