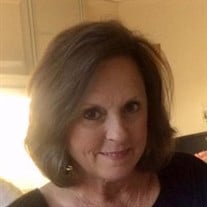 PERRY – Janna Meaders Gray, 68, passed away just after midnight on Wednesday, February 5, 2020, following an unexpected, sudden illness. Visitation will be on Friday, February 7, 2020, from 5:00 until 7:00 p.m. in the Sanctuary at Perry United Methodist Church. Funeral Services will be on Saturday, February 8, 2020, at 2:00 p.m. at Perry United Methodist Church. Interment of Janna and re-interment of her infant son, Stephen Blake Gray, will be in Evergreen Cemetery immediately following the service. In lieu of flowers, the family respectfully requests memorial contributions to Perry United Methodist Church Building Fund, 1002 Carroll Street, Perry, GA 31069 or The Westfield School Lower School, 2005 US Hwy 41, Perry, GA 31069. Janna was born in Mobile, Alabama, and moved to Houston County as a teenager. She graduated from Northside High School in 1969, and began her college career at Georgia Southern College. She then transferred to Middle Georgia College where met the love of her life, Steve Gray, and then transferred once more to Valdosta State College where she was in the Alpha Delta Pi Sorority and earned her degree in Early Childhood Education. Janna and Steve married on March 2, 1974. That same fall, Janna began her career as a teacher at The Westfield School in Perry. She taught second grade for ten years, was moved to third grade, and finally first grade where she would retire after thirty-two years in education at the same school. While working as a teacher and going to class at nights and on weekends, Janna earned a Master’s Degree from Georgia Southwestern College. Mrs. Gray was always one of the favorite teachers of students and of parents, always loving on everyone, encouraging and nurturing those babies like they were each hers, and being just what was needed at the just the right time. She always loved children and treated thousands through the years as her own. A long-time member of Perry United Methodist Church, Janna was active with the children’s department, volunteered with the youth while her kids were participating, and served on various committees through the years. She enjoyed spending time in the Word and with her friends at Bible study. Janna’s passion in life, though, was her family, and she was gifted at loving people. Janna was so proud of her children and the lives they have built. She was thankful that Adam found something that he enjoys doing and just recently, she attended several concerts and saw him “in action” as a lighting designer for professional musicians and was thrilled to be supportive of his accomplishments. As Ashley’s art developed into a business rather than a hobby, Janna was always there to support her by assisting or advertising. After Ashley married and began having children, Janna was always available to help with the kids, even if it meant traveling to South Carolina in a minute’s notice. Becoming a grandmother was extra special to Janna, and she loved it when her grandchildren called her, “Honey,” just like her husband had always done. The other “kids” in Janna’s life were her animals, which were cherished by her and the fun times they had together. From her goats to her chickens in the magnificent coop that her husband built for her, to her precious four-legged, long-haired dog, Jenny, who has been at her feet and by her side for the past fourteen years, Janna shared special times with each and all of them. Janna was preceded in death by her father, Cleater James “C.J.” Meaders, Sr., and her infant son, Stephen Blake Gray. Left to cherish the memories they made with Janna are her loving and devoted husband of 45 years, Steve Gray of Perry; her son and daughter-in-law, Adam Gray and Rachel McCracken of Nashville, Tennessee; her daughter and son-in-law, Ashley and Phillip Cease of Columbia, South Carolina; her grandchildren, Corbin Kirk Bushman, Elizabeth Meaders “Liza Meade” Cease, Gray Caroline Cease, and Carlyle Stephens Cease; her mother, Billie Meaders of Centerville; her siblings, Karan Slaughter (John) of Mobile, Alabama, and Cleater Meaders, Jr. of Hoschton, Georgia; and many nieces, nephews, and cousins whom she loved dearly. Condolences for the family may be left in the online guestbook at www.watsonhunt.com. Watson-Hunt Funeral Home has been entrusted with the arrangements.

The family of Janna Meaders Gray created this Life Tributes page to make it easy to share your memories.

Send flowers to the Gray family.