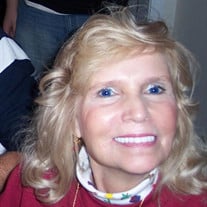 HAWKINSVILLE – Janet “Jan” Elaine Collier, 78, peacefully went to dwell with her Father in the House that Jesus built for her after a long and courageous battle with heart disease when she passed away on March 1, 2020, just days before her 79th birthday. Family and friends are invited to celebrate Jan’s life at a Memorial Service on Friday, March 6, 2020, at 11:00 a.m. at Perry United Methodist Church. Born in Twinsburg, Ohio, the only daughter of Robert Kirkwood and Ivadell Emmaline Norton, Jan and her brother, Bobby, were brought up in a relationship with Christ. Jan’s walk with Jesus led her to Perry United Methodist Church where she became a member in 1972. Jan always had a competitive way about her, never walking away from a challenge. Jan was an avid league bowler and dearly loved bowling with her Monday Seniors, “Fun Bunch” friends and competing in the leagues in Warner Robins. Jan was a world-class, league horseshoe pitcher. She was a member of the Perry Horseshoe Pitcher’s Club and the Georgia Horseshoe Pitcher’s Association, holding numerous awards and medals. Relentlessly demonstrating her competitive nature in everything she did through her life, Jan was a twirling majorette and played basketball; learned to eloquently play the piano; enjoyed playing shuffleboard with her “Daddy”; had outstandingly remarkable penmanship and was a talented artist; trained show dogs; and with her degrees in Business Administration and in Science, developed accounting software, becoming an accounting software expert with DEC “digital” VAX computers. She moved to Orlando, Florida, and continued working in Account Management and got involved in local sports there. She soon met the love of her life, Collin Collier, and the two were married on October 6, 1990, at Perry United Methodist Church. In 1992, the couple returned to the Perry/Hawkinsville area. Jan continued her love of competitive games, returning to tournament/league bowling and horseshoe pitching, and even participated in Table Tennis at the Golden Olympics Nationals in Baton Rouge, Louisiana. Sometimes known as “Nannie”, Jan always had a way of making friends. She was fast to spark up a conversation wherever she went. She was a kind and loving person with interesting ideas and thoughts which always led her into church and community involvement. She was a member of the Missions Outreach Sunday School Class at Perry United Methodist Church and was currently serving as their Secretary of many years. Jan was preceded in death by her parents and her brother, Robert A. Norton. Left to cherish the precious memories they made with Jan are her loving and devoted husband of nearly 30 years, Collin Collier; her son, Robert D. Quesenberry of Warner Robins; her daughter and son-in-law, Debbie Q. and Don Howell of Norcross; and her grandchildren, Alex Quesenberry, Natalie Quesenberry, and Robert D. Quesenberry, Jr. Condolences for the family may be left in the online guestbook at www.watsonhunt.com. Watson-Hunt Funeral Home has been entrusted with the arrangements.

HAWKINSVILLE &#8211; Janet &#8220;Jan&#8221; Elaine Collier, 78, peacefully went to dwell with her Father in the House that Jesus built for her after a long and courageous battle with heart disease when she passed away on March 1, 2020, just... View Obituary & Service Information

The family of Janet "Jan" Norton Collier created this Life Tributes page to make it easy to share your memories.

Send flowers to the Collier family.