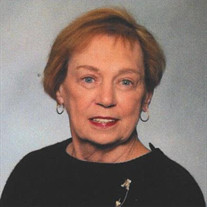 Jane Summers Whipple, 81, passed away peacefully on Friday, October 11, 2019. Visitation will be on Monday, October 14, 2019, from 10:00 until 11:30 a.m. at Watson-Hunt Funeral Home in Perry. Graveside Services will also be on Monday, October 14, 2019, at 2:00 p.m. at Cedar Hill Cemetery in Cochran. In lieu of flowers, the family respectfully requests memorial contributions to Perry United Methodist Church, 1002 Carroll Street, Perry, GA 31069. Mrs. Whipple was born in Hastings, Nebraska, to the late Reuel and Edna Shanabergar Summers. A graduate of Lincoln High School, Jane earned a Nursing Degree at the University of Nebraska and was a Registered Nurse with Atrium Pediatrics for over 20 years. In 1990, she moved to Middle Georgia and joined Perry United Methodist Church. She was very active in the Joy Choir, the IHS Sunday School Class, United Methodist Women, and the Homebound Communion Ministry. She was also very active in the Heart of Georgia Walk to Emmaus. Jane was a member of the Sorosis Club, a ladies’ service organization in Perry; the Ladies’ Golf Association at Perry Country Club; and the Garden Club of Perry. As a nurse, she continued to care for others by volunteering for many years at Hospice of Houston County (now Heart of Georgia Hospice) at Serenity Gate (now Hazel Colson Hospice House) at Perry Hospital. Later in life, Jane’s caring and nurturing heart led her to train her Border Collie, Mollie, to be a therapy dog, and they visited with patients in the Children’s Hospital in downtown Macon for several years. She was preceded in death by her husband, Deryle T. Whipple; her siblings, Kermit Summers, Richard Summers, Don Summers, Joan Hendrick, Robert Summers, and Reuel Summers; and a grandson, Travis Rogers. Left to cherish the memories they made with Jane are her loving and devoted daughter and son-in-law, Pamela and Jeff Urban of Elko; her son, Mark Rogers of New Jersey; her grandsons, Rick Maye, Mitchell Urban (Molly Addison), and Cody Urban (Ashley); 2 great-grandchildren; her sister, Judy Neeman; her brothers, Ian Summers (Jay) and Jon Summers (Rosemary); and many nieces and nephews. Condolences for the family may be left in the online guestbook at www.watsonhunt.com. Watson-Hunt Funeral Home has been entrusted with the arrangements.

The family of Jane Summers Whipple created this Life Tributes page to make it easy to share your memories.

Send flowers to the Whipple family.