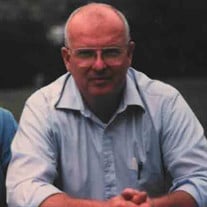 HAWKINSVILLE – James Paul Wilson, 80, passed away on Thursday, April 18, 2019. Visitation will be on Monday, April 22, 2019, from 5:00 until 7:00 p.m. at Watson-Hunt Funeral Home in Perry. Funeral Services will be on Tuesday, April 23, 2019, at 11:00 a.m. at Memorial Heights Baptist Church in Perry. Burial will be in Perry Memorial Gardens immediately following the service. James was born in Gramling, South Carolina, to the late Frank Paul and Mildred Stone Wilson. They moved to Perry when James was 10 years old. At a young age, James learned to enjoy riding horses, even after he was thrown from the back of one. He developed a love for trucks – all kinds of trucks – and learned to repair them efficiently. He went to Houston County Schools and graduated from Perry High School. After graduation, James became a truck driver and continued doing so for 40 years. Upon retirement, he began reading to kids in the elementary schools where his grandchildren attended – the same Houston County School System that he and his children had attended. His popularity grew, and soon many teachers were asking could he read to their classes. James loved the kids and would wear a special kind of cowboy hat that the kids could sign their names on while he was at the schools. While volunteering with the school system, James collected 64 autographed hats that he treasured. He loved his family and cherished the time spent with them. He was predeceased by his parents and his brother, Marvin Wilson. Left to cherish the memories they made with James are his loving and devoted wife of nearly 60 years, Helen Wilson of Hawkinsville; his children, Sandra Singleton of Hawkinsville, Laura Shaw of Asheville, NC, and Paul Wilson of Hawkinsville; his grandchildren, Doug Singleton, Wendy Younts, James Singleton, Richard Singleton, Beth Sabelko, Ashley Roberts, Midori Shaw, Anna Wilson, and Chris Wilson; sixteen great-grandchildren; his sister, Bobbie Wilson Dean; and several nieces and nephews. Condolences for the family may be left in the online guestbook at www.watsonhunt.com. Watson-Hunt Funeral Home has been entrusted with the arrangements.

The family of James Paul Wilson created this Life Tributes page to make it easy to share your memories.

Send flowers to the Wilson family.