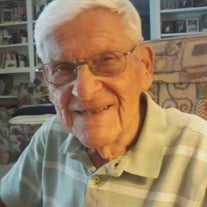 WARNER ROBINS- James Hubert Logue, age 86, of Warner Robins, Georgia, passed away peacefully on October 30, 2021, after a long and happy life. Jim lived a life of service to and love of his family and country. He will be missed by all. There will be a graveside service with full military honors at Perry Memorial Gardens, 2106 US Hwy. 41, Perry, GA at 2:00 p.m. on Saturday, November 13, 2021. In lieu of flowers, please consider a donation to the Alzheimer’s Association, 886 Mulberry Street, Macon, GA 31201. Jim, the third of eight siblings, was born on March 22, 1935, in Perry, Georgia, to the late Joseph Hubert Logue and the late Evelyn Rowell Logue. Jim enrolled in the United States Air Force following high school and served his country for over 20 years, retiring as a Senior Master Sergeant in 1974. Jim also worked as a civilian employee for the Department of Defense and for Southwest Research Institute. Jim was married for 65 years to Ann Benson Logue. They lived and traveled all over the United States, the Caribbean, Canada, and Europe and made friends wherever they went. Jim was an avid student of military history and could recount the details of military battles and the specifications of military aircraft. He shared his love of history with his grandchildren, including recounting the exploits of American and Allied troops during World War II and the D-Day invasion while on a trip to England and France. Jim was preceded in death by his parents and his siblings Robert Logue, Betty Logue Lewis, Olin Logue, Nancy Logue Ranke, Donald Logue, and Alfred Logue. Jim leaves behind his wife, Ann; his children, Kimberly Logue Woodland and James Michael Logue; his daughter-in-law, Alma Hernandez Logue; his grandchildren, Helen, Patrick, and Ashley; his sister, Gail Logue Brannen; his brother-in-law, Jack Brannen; and numerous nieces and nephews. Condolences for the family may be left in the online guestbook at www.watsonhunt.com. Watson-Hunt Funeral Home has been entrusted with the arrangements.

WARNER ROBINS- James Hubert Logue, age 86, of Warner Robins, Georgia, passed away peacefully on October 30, 2021, after a long and happy life. Jim lived a life of service to and love of his family and country. He will be missed by all. There... View Obituary & Service Information

The family of JAMES HUBERT LOGUE created this Life Tributes page to make it easy to share your memories.

Send flowers to the LOGUE family.