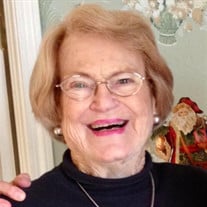 PERRY, GA – Jacquelyn Elizabeth Ward Marshall, 91, of Perry, Georgia, peacefully passed away on January 16, 2020, surrounded by family who adored her. Funeral Services will be held on Saturday, January 25, 2020, in the Sanctuary at Perry United Methodist Church. The Visitation will begin at 1:00 p.m. and the Funeral will begin at 2:00 p.m. Interment will be private. In lieu of flowers, Jackie’s family respectfully requests memorial contributions to her church of 70 years, Perry United Methodist Church, 1002 Carroll Street, Perry, GA 31069. Jackie was born on July 28, 1928, in Akron, Ohio, to the late John Powell Ward and Gladys Matthews Ward. Her family moved to Camilla, GA, in 1931, where she grew up and graduated from Camilla High School. She graduated Cum Laude from Mercer University in Macon, where she was a member of Chi Omega and Cardinal Key Honor Society. Jackie met the love of her life, W. Earl Marshall, III, at Mercer. They married in December of 1949, and moved to his hometown of Perry. Mrs. Marshall taught Biology and Physiology at Perry High School and The Westfield School and was named STAR teacher on four different occasions. She took great pride in the teaching profession and loved her students. “Mrs. M” to her students, she started every home room class with a prayer. In addition to teaching, she coached the debate team, and she and Mr. Marshall were the advisors for the Junior-Senior dances and led field trips to Ossabaw Island for many years. She was always involved in the community through church, school, and other activities --- as a Girl Scout leader and active PTA parent, as President of the Tawasi Club, member of the Muse Book Club, and later as one of the founding members of the Crossroads Quilt Guild. A member of Perry United Methodist Church for 70 years, she was a member of the I.H.S. Sunday School Class, the Sanctuary Choir, and the Joy Choir. She loved singing in the choir and especially enjoyed the Christmas cantatas and special music. She helped set up the church library and served three separate tenures as president of WSCS/UMW at Perry United Methodist Church. Jackie loved being in the beauty of nature through camping and backpacking. The family made several cross-country camping trips when their girls were growing up, and she and Mr. Marshall took their grandchildren on many camping and hiking trips over the years. She enjoyed trips with Perry Wilderness Society, especially the trips to Cumberland Island. She celebrated her retirement from teaching by hiking the 13 miles of the Appalachian Trail in Georgia. She always said she felt closer to God on the trail. She adored her family and getting them together at every opportunity --- Thanksgiving, Christmas, and most Easters and Mother’s Days --- really, any occasion for the whole family to gather, enjoy being together, and celebrate with her. Jackie was preceded in death by her parents, her beloved husband, W. Earl Marshall, III, and her brother, Paschael Ward of Camilla. Left to cherish all the wonderful memories made with her are her three daughters, Daun Cioban (Don)of Auburn, AL, Laurie Jackson (Randy) of Athens, and Tonda Watson (Marque) of Fernandina Beach, FL; her grandchildren, Chad Cioban (Hannah), John Cioban (Jenny), Melissa Chorman (Dan), Courtney Howell (Bill), Rachel Callis, Quin Watson, and Cole Watson. She also leaves behind great-grandchildren, Caroline and Ben Cioban, Chase Cioban, Ansley and Davis Chorman, Madison and Savannah Callis, Harrison and Marshall Howell; her brother-in-law and sister-in-law, Tom and Martha Marshall; and her much loved nieces, nephews, and cousins. Condolences for the family may be left in the online guestbook at www.watsonhunt.com. Watson-Hunt Funeral Home has been entrusted with the arrangements.

PERRY, GA &#8211; Jacquelyn Elizabeth Ward Marshall, 91, of Perry, Georgia, peacefully passed away on January 16, 2020, surrounded by family who adored her. Funeral Services will be held on Saturday, January 25, 2020, in the Sanctuary at Perry... View Obituary & Service Information

The family of Jacquelyn "Jackie" Ward Marshall created this Life Tributes page to make it easy to share your memories.

Send flowers to the Marshall family.