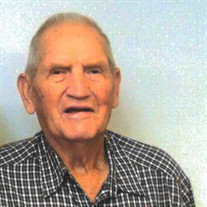 PERRY – Howard Irvin Wooden, Jr, 86, died on Wednesday, December 22, 2021. Funeral Services will be held on Wednesday, December 29, 2021, at First Baptist Church of Perry with Roy Gentry officiating. Visitation will be at 1:00 p.m. followed by the funeral at 2:00 p.m. Interment will be private. In lieu of flowers, the family respectfully suggests memorial contributions in Howard’s memory be made to the Houston County Council on Aging, Meals on Wheels, P. O. Box 118, Warner Robins, GA 31099. Mr. Wooden was born on March 29, 1935, in Bogalusa, Louisiana, to the late Howard I. Wooden, Sr, and the late Lena Rivers Souder Wooden. His family lived in Port St. Joe, Florida, while his father was superintendent of the St. Joe Paper Company. They moved to Warner Robins in 1943 where his father worked on Robins Air Force Base and operated Elberta Grocery Store. Howard attended schools in Bonaire and Warner Robins. He graduated from Warner Robins High School in 1954 where he played on the first football team. He was also on the track and baseball teams. He married his high school sweetheart, Rachel Lynn Cullison, that same year. Mr. Wooden proudly served our country in the U.S. Army with the Third Armored Division and was a member of the Honor Guard in Bitburg, Germany. After his time in the military, he was employed at Georgia Kraft in Macon. He left that job after ten years to start his own business, Howard’s Mobile Home Service. His knowledge of the mobile home industry was well known throughout the Middle Georgia area. Many of his former customers continued to seek his advice, even after his retirement. He sold his business in 1994 to become a farmer. He enjoyed looking after his cattle and hay operation. He was a great animal lover and rescued several through the years. He was also a man of strong morals and was compassionate to those less fortunate. Mr. Wooden loved life, hard work, old people, and dogs. He was very patriotic and always said he wanted to “leave this life better than he found it.” He attended First Baptist Church of Perry and was a member of the Avon Buice Sunday School class. Along with his parents, he was predeceased by his sisters, Frenchie Wooden Ramsey, Mary Louise Wooden Griffin, Wilna Wooden Williamson, and Olivia Wooden Francour. Left to cherish the memories they made with Howard are his loving and devoted wife of sixty-seven years, Rachel Cullison Wooden of Perry; his sister, Sadie Wooden Holt of Warner Robins; and numerous nieces, nephews, great-nieces, and great-nephews. A special Thank You is extended to Mr. Cameron Harris, Mr. Bobby Pulsifer, and Mrs. Angela (Angel) Crawford for their love and care to Howard during his final days. Condolences for the family may be left in the online guestbook at www.watsonhunt.com. Watson-Hunt Funeral Home has been entrusted with the arrangements.

The family of HOWARD WOODEN JR created this Life Tributes page to make it easy to share your memories.

Send flowers to the WOODEN family.