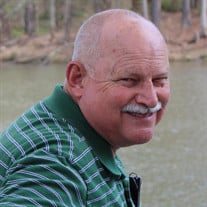 PERRY – Howard Lee Ekey, 73, passed away in the arms of his loved ones on Wednesday, April 14, 2021. The family will visit with friends on Sunday, April 18, 2021, from 3:00 until 5:00 p.m. at Watson-Hunt Funeral Home. A private burial will take place at Ft. Steuben Burial Estates in Wintersville, Ohio. In lieu of flowers, the family respectfully requests memorial contributions to St. Jude Children’s Research Fund, c/o Window World Cares, 118 Shaver Street, N. Wilkesboro, NC 28659 or Friends of Perry Animal Shelter (FOPAS), P. O. Box 2001, Perry, GA 31069. Howard was born in Steubenville, Ohio, to the late James E. and Lillian Wallace Ekey. He served his country as a Radio Relay Repairman in the United States Air Force from 1968 to 1972, and was stationed in Lackland, Texas; Keisler, Mississippi A.F.B.; Clark A.F.B in the Philippines; Elmendorf A.F.B. in Anchorage, Alaska; and Tinker A.F.B in Dell City, Oklahoma. He finally called Perry, Georgia, “home” in 1982. Howard retired from Blue Bird Corporation after twenty-one years as a Design Electrical Engineer. Howard proudly served as President of Camelot Fun & Sun for several years in the 1990s and was still a Board Member to date. Howard was also a member of Perry United Methodist Church. Between the years of 1993 and 2000, Howard spent every Friday night at the Hornet’s Nest preparing pre-game meals. He was an avid numismatist (coin collector and researcher) and enjoyed his friendships at the local coin club. In the summers you could find Howard tending to his garden full of tomatoes, green beans, and peppers. Above all else, Howard loved spending time with his family, especially his grandkids, and walking his dog. He welcomed every opportunity to gather with his loved ones – especially with good food! Left to cherish the memories they made with Howard are his children, Alyssa Ekey Head (Kevin) of Gainesville, GA, Weston Ekey (Katie) and Chad Ekey (Jessica), both of Perry; eight grandchildren; Pam Ekey; and several nieces and nephews. Howard was preceded in death by an infant brother; his parents, James and Lillian Ekey; and his brother, James “Butch” Ekey. Condolences for the family may be left in the online guestbook at www.watsonhunt.com. Watson-Hunt Funeral Home has been entrusted with the arrangements.

The family of HOWARD L. EKEY created this Life Tributes page to make it easy to share your memories.

Send flowers to the EKEY family.