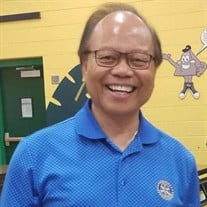 PERRY – Dr. Horatio Vicera Cabasares, 73, passed away suddenly and unexpectedly on Wednesday, December 16, 2020, after a brief illness. Everyone is invited to participate in a safe-distance visitation by remaining in the comfort of your vehicle as you drive through the circle driveway at Watson-Hunt Funeral Home to express love and support for his family on Monday, December 21, 2020, from 3:00 until 4:30 p.m. A Private Funeral Mass will be celebrated at St. Patrick Catholic Church with Father Eric Filmer and Deacon Jim Roberge officiating. In lieu of flowers, the family respectfully requests memorial contributions to Rotary Club of Perry, P. O. Box 1770, Perry, GA 31069. Horatio was born in Biliran, Leyte, Philippines, to the late Ariston and Maria Vicera Cabasares. He received a Doctor of Medicine Degree from Cebu Institute of Medicine in the Philippines, moved to the United States and worked a rotation in Michigan for two years, then began his Residency as a Surgeon at The Medical Center in Macon in 1975. In 1981, he made the decision to move his family to Perry, since there was no local surgeon. Thus, began the legacy of Dr. Cabasares, also known as “Cabby,” to which he was fondly referred by most everyone he met. His love for Perry grew through the years, and he was a community servant and ambassador to the city he adored for nearly forty years. As a long-time member of Perry Rotary Club, Cabby had served as President of the local club several times, served on various committees, was elected a Paul Harris Fellow of Rotary International, and helped begin the summer program to distribute free books for kids in the school zone where some of his grandchildren attend. He was a southern gentleman who lived out the beliefs and responsibilities of a true Rotarian – promote peace; fight disease; provide clean water, sanitation, and hygiene; save mothers and children; support education; and grow local economies. Dr. Cabasares was all of this and so much more. Cabby was a family man, always supporting and encouraging his children to be the best that they could be, providing them with the basic and advanced education needed to succeed, and supporting their decisions as they moved into adulthood. There was always quality time for the family at the dinner table, and as the grandchildren came along, he treasured the moments watching them grow up. He was very proud of his children and grandchildren. It delighted him to see his own children become parents, following the examples that he and Lorna had given them. While Dr. Cabby and his wife, “Mrs. Cabby,” enjoyed a warm, loving, and comforting environment in which to raise their family, Perry Hospital was truly his second home. During the nearly four decades that Cabby spent as a surgeon there, he was instrumental in improving Perry Hospital, adding and updating a great deal of surgical and treatment equipment, and helping the hospital reach the quality facility to which it is today. For many years, Dr. Cabasares served as Chief of Staff and sat on the Board of Directors, as well as being a mentor to many in the healthcare field. Collaborating with other local physicians, Cabby traveled with Central Baptist Church on several mission trips and was involved with Medical Mission in the Philippines, his native country, sending medical equipment and supplies to various clinics in need. He was a devout catholic and long-time member of St. Patrick Catholic Church, celebrated mass regularly, was active with the church in the Men’s Group, and served on various committees and mission projects over time. Left to cherish the memories they made with Cabby are his loving and devoted wife of forty-eight years, Lorna Cabasares of Perry; his children, Hubert “Bert” Cabasares of Kathleen, Hanz Cabasares (Tori) of Kathleen, and Leigh Wolk (David) of Perry; six grandchildren; his brother, Senesio Cabasares (Adela) of the Philippines; two nieces; many other extended family members; and a host of friends and colleagues who will miss him dearly. Condolences for the family may be left in the online guestbook at www.watsonhunt.com. Watson-Hunt Funeral Home has been entrusted with the arrangements.

PERRY &#8211; Dr. Horatio Vicera Cabasares, 73, passed away suddenly and unexpectedly on Wednesday, December 16, 2020, after a brief illness. Everyone is invited to participate in a safe-distance visitation by remaining in the comfort of your... View Obituary & Service Information

The family of DR. HORATIO V. CABASARES created this Life Tributes page to make it easy to share your memories.

Send flowers to the CABASARES family.