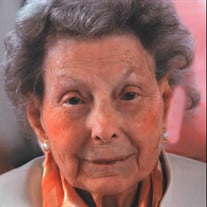 The Lord called Hilda Gray Walker, 99, home in the early hours of Friday, July 5, 2019, at Houston Medical Center after a very brief illness. She died peacefully surrounded by her four children and other family members. Funeral Services will be held on Monday, July 8, 2019, at 2:00 p.m. at Perry United Methodist Church with Dr. Brad Brady officiating. The family will receive friends in the church Fellowship Hall immediately following the service. A private interment will be held in Evergreen Cemetery. Contributions in Hilda’s Memory may be made to Perry United Methodist Church, 1002 Carroll Street, Perry, GA 31069 or First Love Ministries, 623 Pine Ridge Street, Perry, GA 31069. Hilda was born in Perry on February 10, 1920, on what is now Hay Road. She was the daughter of the late Charles and Hazel Nichols Gray. She was a lifelong, active member of Perry United Methodist Church and attended Perry High School from which she graduated at age sixteen age in 1936. She was the last living member of her high school graduating class. One of the most significant life changing events of Hilda’s life was attending Andrew College in Cuthbert, Georgia. She was the president of her class and was editor of the college’s yearbook. She graduated with an Associate’s Degree in 1938. Years later, she was honored to serve on the Board of Trustees of Andrew College and gave many hours helping make decisions to advance the college and its future. She loved Andrew and was a big fan while the rest of her family were fans of the Georgia Bulldogs. Also, in 1938, Hilda met a young teacher, Cohen Walker, from Washington County who had come to Perry to teach vocational agriculture and eventually served as the school’s principal. In December of 1938, they married at Perry United Methodist Church and enjoyed over 60 years together before Cohen’s death in 2002. For the most part, Hilda stayed home to raise her four children constantly creating a loving and welcoming environment for her family and their friends. She did work for a short period of time as a bookkeeper at Houston Drug Company and at Gray-Walker Supply Company. For many years, she was an active member of the Delphian Club and other service organizations in the community. Hilda loved life and loved people. She was kind, polite, and giving to all people, regardless of their social standing, economical class, or race. She found the good in everyone and taught her children to do the same. She was very pure hearted. Perhaps a good verse to describe her life is “Blessed are the pure in heart, for they shall see God” (Matthew 5:8). Hilda was preceded in death by her parents, and her three sisters, Virginia Mason, Helen Parker, and Betty Talton. Left to cherish the memories they made with Hilda are her four loving and devoted children, Larry Walker (Janice), David Walker (Deborah), Lynda Kelly (Bob), and Charlie Walker. She is also survived by her fourteen grandchildren, Larry Walker III, Wendy Walker Way, Russell Walker, John Gray Walker, David Walker Jr., Mary Katherine Walker, Don Walker, Jodi Hulbert Zammit, Paul Hulbert, John Hulbert, Ben Hulbert, Matthew Hulbert, Mark Hulbert, and Jill Hulbert Thigpen, and 31 great-grandchildren. The family would like to express their deep appreciation to Dr. Bruce Sampson for his care of Hilda over the course of many years and to Hands of Hope’s Tina Dickerson and her staff – Paige, Darla, Ashley, and Gladys – who provided loving care to Hilda in the last months of her life. Hilda’s children also thank Helen Law for being Hilda’s friend and hairdresser every Friday for many, many years. Condolences for the family may be left in the online guestbook at www.watsonhunt.com. Watson-Hunt Funeral Home has been entrusted with the arrangements.

The Lord called Hilda Gray Walker, 99, home in the early hours of Friday, July 5, 2019, at Houston Medical Center after a very brief illness. She died peacefully surrounded by her four children and other family members. Funeral Services will... View Obituary & Service Information

The family of Hilda Elizabeth Gray Walker created this Life Tributes page to make it easy to share your memories.