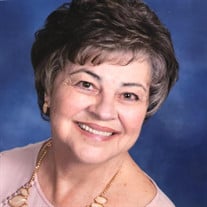 PERRY – Hatsie Kennedy Kinsley, 80, passed away peacefully on Friday, March 12, 2021. Funeral Services will be held on Monday, March 15, 2021, at 11:00 a.m. at Perry United Methodist Church with Reverend Tommy Perkins officiating. Interment will be in Perry Memorial Gardens immediately following the service. In lieu of flowers, the family respectfully requests memorial contributions to The Methodist Home for Children and Youth, P. O. Box 2525, 304 Pierce Avenue, Macon, GA 31204. A daughter of the late Robert and Margaret Schafer Kennedy, Hatsie was born in New Orleans and raised in Baton Rouge, Louisiana. She met the love of her life, Leonard Kinsley, at LSU, and the couple married in 1960. In 1961, they moved to Perry and settled to raise their family. Hatsie was a long-time member of Perry United Methodist Church and the Christadelphian Sunday School Class where she served as Secretary for many years. Church was very important to her, as was obvious through the years by her involvement. She was a leader in the Women’s Say So Circle at PUMC, volunteered with Brian Bowen Snax Sax, and made sure that the girls in the cottage at the Methodist Home for Children and Youth had Christmas presents and birthday presents each year. While she spent a large part of her life as a homemaker, Hatsie worked part-time every year at the Houston County Tag Office during “tag season” and later worked for several years as a Secretary at Hulbert, Daniel, Lawson Attorneys. Even though it was work, she was happy to meet and see so many people each day, sharing her lovely smile and friendly conversation with everyone. Hatsie was thrilled when she started having grandchildren, and as the number grew, so did the activities that she attended. Her family was her greatest joy, and she hardly ever missed a baseball game, gymnastics, and the variety of extracurricular activities in which they participated. A talented seamstress, she was known for making Halloween costumes and even costumes for school projects for her grandchildren. Hatsie loved giving and crocheted hats for newborn babies, made prayer shawls to share when she visited friends and neighbors, spent time sewing Hospice pads for patients, and was instrumental in starting the Birthday Bags Program at Loaves and Fishes. She was so honored to be recognized on the Perry Volunteer Outreach sign that read, “Hatsie Kinsley, you make Perry a great place to live.” Hatsie was an excellent bridge player and savored that time spent with close friends around the table every week for years. She was a member of the Idaka Club. A cancer survivor, she fought hard through illnesses, has now completed the course set before her by God, and kept the faith through it all. She will be dearly missed by all those who knew and loved her. Left to cherish the memories they made with Hatsie are her loving and devoted husband of sixty years, Leonard Kinsley of Perry; her son and daughter-in-law, Dr. Michael and Diane Kinsley of Kathleen; her daughter and son-in-law, Cheri and Charles Ehlers of Greer, SC; her grandchildren, Ryan Kinsley (Michelle), Nick Kinsley (Kristin), Beau Lunceford, Zack Kinsley, Kasey Lunceford, Kristen Prater (Tim), Adam Ehlers, Anastasia Ehlers, Dariya Ehlers, Grace Bianco (Harrison), Dennis Ehlers, and Lily Faith Ehlers; her siblings, Bobby Kennedy (Sylvia), Linda Simpson, Buddy Kennedy, and Dawn Bean (Ronnie); and many nieces, nephews, great-nieces, and great-nephews. Hatsie was preceded in death by her parents and a brother-in-law, Jack Simpson. Condolences for the family may be left in the online guestbook at www.watsonhunt.com. Watson-Hunt Funeral Home has been entrusted with the arrangements.

The family of HATSIE KENNEDY KINSLEY created this Life Tributes page to make it easy to share your memories.

Send flowers to the KINSLEY family.