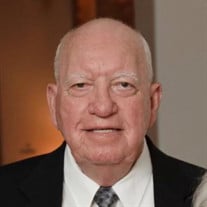 PERRY – Henry Edward Chapman Sr., also known as “Chat,” passed away peacefully at the age of 91 on March 17, 2022, in Perry, Georgia. Ed was born in Perry, Georgia, in 1931 and was the son of the late Chalmus Clinton Chapman and the late Emmie Bryant Chapman. He had six brothers and one sister, all of whom preceded him in death. He attended all twelve years of school in Perry and graduated from Perry High School in the Class of 1949. In high school, Ed was a valuable player for the legendary Coach Eric Staple’s basketball dynasty. He helped the panthers win two State Championships (1947 and 1949), played in the Southeast All-Star Game, and was selected as an All-American basketball player by several publications. Following a brief stint playing college basketball at Georgia Southwestern College, Ed enlisted in the U.S. Air Force and served his country during the Korean War. Also, during this time, Ed married Jane Snyder and started their family with the addition of their three children. Ed returned to Perry after his honorable discharge to work for his father, Sheriff C.C. Chapman, followed by a time with the Georgia State Patrol. He later returned to college as an adult to complete his studies in accounting. He worked in public accounting before purchasing a regional CPA firm and partnering with his son, Snyder, to form Chapman PC, CPA. Ed was also an entrepreneur and created several ventures, including two bar-b-que restaurants, a motel, and a catering company. After retiring at age 65, Mr. Ed and Mrs. Jane spent most of their time together, visiting friends, family, and their favorite restaurants. Ed enjoyed playing golf, fishing, quail hunting, and cooking. He is remembered fondly by others as someone who was a great story teller, and he enjoyed sharing the details of those various adventures. Ed was a participant in the unofficial “Perry Breakfast Club” and joined his friends most mornings for coffee, biscuits, and gossip. Ed was preceded in death by his wife of 69 years, Jane Snyder Chapman, who passed away on July 30, 2021. He is survived by his daughter, Carol Mathias Gorman of Macon; two sons, Ed Chapman Jr. (RichieLynn) and Snyder Chapman, both of Perry; seven grandchildren; and twelve great-grandchildren. He has several nieces and nephews, and many great-nieces and great-nephews. The family would also like to share their gratitude for the generosity of Ed’s friends, relatives, and the medical community who contributed tremendously to his quality of life through your visits, calls, assistance, and loving care that you showed him during his last years. With Covid still strong in our community last summer, the Chapman family were not able to have a service to celebrate Jane’s life. Therefore, a Memorial Service for both Jane and Ed Chapman will be held on Tuesday, March 22, 2022, at 11:00 a.m. in the Sanctuary at Perry United Methodist Church. A private burial will take place in Evergreen Cemetery. In lieu of flowers, please consider a donation to the Georgia Sheriffs’ Youth Homes, 3000 Highway 42 North, McDonough, GA 30253, or to your preferred charity. Condolences for the family may be left in the online guestbook at www.watsonhunt.com. Watson-Hunt Funeral Home has been entrusted with the arrangements.

The family of HENRY EDWARD "CHAT" CHAPMAN, SR. created this Life Tributes page to make it easy to share your memories.