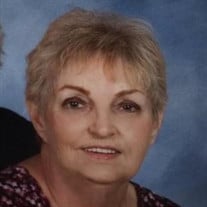 Gracie Bailey Souto, of Fort Valley, passed away on August 12, 2020, from a short battle with cancer. She was 80 years old. Funeral Services will be held on Friday, August, 14, 2020, at 10:00 a.m. in the chapel at Watson-Hunt Funeral Home. Gracie will be laid to rest at Perry Memorial Gardens, immediately following the funeral services. Gracie Allen was born in Frisco City, Alabama, to the late Irvin Winfield and Rosie Lee Smith Bailey. Gracie grew up on the farm that her family owned, where she learned to appreciate the things in life that you are given. Gracie to placed value on things that mattered to her the most. As a young girl she took extra care of her shoes, because Gracie didn’t know when she’d get the next pair. The wisdom she gained from her time on the farm shaped her into the women she became. She was a faithful and long-time member of Sacred Heart Catholic Church, in Milledgeville. Gracie was amazing cook and she found pure joy in sharing the meals she prepared with others. Gracie lived each day for her family and was affectionately known as Maw-Maw or Grandma Grace. During a flight to California, she shared with the pilot that it was her life-long dream to learn how to fly, so he invited her into the cock-pit. Gracie went to school for nursing, worked for the Macon Telegraph, Cox Cable, and Geico, but her favorite job was being a homemaker for her family. She will be deeply missed and forever loved. Along with her parents, Gracie was preceded in death by her siblings, James Bailey, Johnnie Bailey, Larry Bailey, and Betty Bailey Hart. Left to cherish the memories that they made with Gracie are her loving and devoted husband of over sixty years, Jack Arthur Souto; her children, Mechele Souto (Alan) Sherrington, Jack Arthur “Buddy” (Tina Adams) Souto, Jr.; her grandchildren, Brittany Souto, Andrea (Doug) Garrett, Kayla Souto, Sarah Sherrington, Meagan Sherrington, Alan James Sherrington, Jr; her great-grandchildren, Mackenzie Garrett, Jaden Souto, Jackson Souto, River Owens; and her siblings, Susie (Roger) Rawls, Roy (Anne) Bailey; and many nieces and nephews. Watson-Hunt Funeral Home has been entrusted with the arrangements for Gracie. Condolences for the family may be left in the online guestbook at www.watsonhunt.com.

Gracie Bailey Souto, of Fort Valley, passed away on August 12, 2020, from a short battle with cancer. She was 80 years old. Funeral Services will be held on Friday, August, 14, 2020, at 10:00 a.m. in the chapel at Watson-Hunt Funeral Home. Gracie... View Obituary & Service Information

The family of Gracie Bailey Souto created this Life Tributes page to make it easy to share your memories.

Gracie Bailey Souto, of Fort Valley, passed away on August 12,...