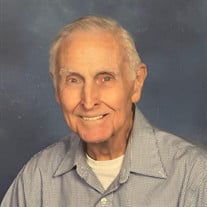 PERRY – George William Pope, age 90, of Perry, Georgia passed away peacefully, on Monday, October 4, 2021. Services will be held on Friday, October 8, 2021, at Watson-Hunt Funeral Home with Reverend Tommy Perkins officiating. A Visitation will start at 10:00 a.m. with the Memorial Service beginning at 11:00 a.m. In lieu of flowers, the family respectfully requests memorial contributions to the Heart of Georgia Hospice, 103 West Ridge Drive, Warner Robins, Georgia 31088 or to Loaves and Fishes of Perry, 1117 Main Street, Perry, Georgia 31069. George was born February 4, 1931, in Rock Run, Alabama to the late William Howard Pope and Stella Alma Waddell Pope. He was an Eagle Scout, which led him to being a Boy Scout executive in Griffin, Georgia. There he met the love of his life, Alvalyn Hutto, his wife of fifty-seven years. He was a graduate of Cedartown High School and earned a Bachelor’s degree from North Georgia College in Dahlonega and a Masters and six year Specialist Degree from the University of Georgia in Athens. He proudly served his country as a member of the United States Air Force. George was very interested in computers and put together one of the first Tandy computers. He spent nearly thirty years as a school administrator in Spalding and Houston Counties. In Spalding County, he served as a science teacher and assistant principal. In 1969 they moved to Perry where he was an assistant principal at Perry High School, a principal at Perry Jr. High School and a principal at Morningside Elementary School. He was a participant at the Annual Principal Conference in Jekyll Island. He was very supportive of the PHS Band Boosters. He especially enjoyed attending many of the school activities with his grandsons. He enjoyed researching family Genealogy. George was a devoted member of the Perry United Methodist Church. George was preceded in death by his parents, his sister, Mary White; his brother, John Pope; and his sister Betty Woody. George is survived by his loving wife, Alvalyn Pope of Perry; his daughter, Stephanie Schofill (Charles) of Perry; his grandchildren; Dean Schofill (Ashley) of Clarksville, Indiana, and Seth Schofill of Knoxville, Tennessee; and his sister-in-law, Beverly Pope of Heflin, Alabama; several nieces and nephews. Condolences for the family may be left in the online guestbook at www.watsonhunt.com. Watson-Hunt Funeral has been entrusted with the arrangements.

The family of GEORGE WILLIAM POPE created this Life Tributes page to make it easy to share your memories.

Send flowers to the POPE family.