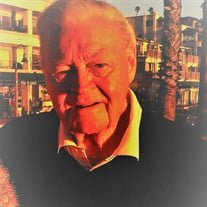 George Clelland Dickson, 94, passed away peacefully on Wednesday, April 14, 2021, at his home. A Celebration of Life Service will be held at Houston Springs and will be announced as soon as the details are available. George was born in Glassgow, Scotland, to the late John and Mabel Gilcrest Dickson. He proudly served our country in the United States Air Force. He was always athletic and was a member of the Air Force baseball team. George earned a Bachelor’s Degree in Engineering from the University of Wisconsin. He spent most of his career in the auto industry employed by General Motors, Detroit Diesel, Allison in Chicago, with much of that time a single father raising his three children. While working with GM for over thirty years, he was an engineer and later served as Vice President of Sales. Upon retirement, George and his wife, Saundra, opened and operated an ice cream shop in Chicago for eleven years. They moved to Englewood, Florida, for a few years, then settled in Perry, Georgia, where they have grown to love their community of Houston Springs and their friends and neighbors there. George was always an avid golfer. He made several Hole-in-One shots, and even had a hole named after him at the Houston Springs golf course. Throughout his life, George was very health conscious, always took care of himself, went to the gym, and even weeks before he passed away, worked out at least three times a week. George was a loving, caring, and generous man. He loved life, loved people, and lived life to the fullest. He will surely be missed by all who knew him. Left to cherish the memories they made with George are his wife, Saundra Mahood Buck Fish Dickson of Perry, GA; his children, Madonna Dickson, Dawn Triana (Jorge), Lisa Smith, Rich Fish (Caley), and Ron Fish (Torrie); ten grandchildren; and four great-grandchildren. He was preceded in death by his parents; his son, John Dickson; and his sister, Jean McClelland. Condolences for the family may be left in the online guestbook at www.watsonhunt.com. Watson-Hunt Funeral Home has been entrusted with the arrangements.

George Clelland Dickson, 94, passed away peacefully on Wednesday, April 14, 2021, at his home. A Celebration of Life Service will be held at Houston Springs and will be announced as soon as the details are available. George was born in Glassgow,... View Obituary & Service Information

The family of GEORGE DICKSON created this Life Tributes page to make it easy to share your memories.

Send flowers to the DICKSON family.