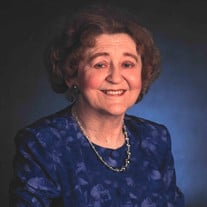 PERRY – Nella Gay Glaser Chambless, 75, passed away peacefully on Sunday, January 3, 2021. Cryptside Services will be held on Saturday, January 9, 2021, at 2:00 p.m. at the Ascension Mausoleum in Perry Memorial Gardens with Reverend Leland Collins officiating. Anyone is welcome to attend. However, due to the national pandemic, please wear a mask for the protection of everyone there. In lieu of flowers, the family respectfully requests memorial contributions to Crossroads United Methodist Women, 1600 Main Street, Perry, GA 31069. Gay was born in Savannah to the late Allen Matney Glaser, Sr. and the late Evelyn Fastyne Southerland Glaser. She earned a Bachelor’s Degree in Early Childhood Education from Georgia Southern College, then taught kindergarten for five years. She married the love of her life, Major Lewis Lee Chambless, and became a “military wife,” moving to various locations for his active-duty tours in the U. S. Air Force including South Korea; Cheyenne, Wyoming; Japan; Texas; California; and Goldsboro, North Carolina; and finally, Houston County, Georgia. A loyal and devoted wife, mother, sister, and aunt, Mrs. Chambless continuously worked to create and maintain a caring, respectful, and spirited environment for her family, no matter where they lived. Gay and Lewis were led by God to adopt and were forever grateful for the opportunity to be parents to a dear son. Throughout Gay’s life, even when her own health restricted her collaboration later in life, she made sure that “her Robbie” had the love, the support, the encouragement – everything – that he needed. Robbie works at Happy Hour Recycling Center, where he has been for thirty years, and always called his mother every night of the work week. Mrs. Chambless enjoyed bringing Robbie home on the weekends for them to take care of each other. The connection between a mother and a son is very special, and their relationship was no exception. Gay and “her Robbie” will forever be bonded with love. Mrs. Chambless was an active member of Crossroads United Methodist Church for over thirty-five years and was very involved in the Children’s Ministries, having taught Sunday School and Vacation Bible School for many treasured years. The love and attention that she gave each and every child was genuine and heart-felt. It always meant so much to Gay to contribute to the spiritual foundations for the future members of the church and to shape their hearts in a way that would be pleasing to God. As a service to the administrative board, she kept the records of attendance and other pertinent membership information during church services, and was a long-time member and Treasurer of the United Methodist Women. Mrs. Chambless was a long-time member of the Akikta Club of Perry, a Women’s Service Organization. She enjoyed the friendships built through the years and the numerous community opportunities in which they volunteered as a group. Gay was preceded in death by her parents, and her loving and devoted husband of over forty years, Major Lewis Lee Chambless. Left to cherish the memories they made with Gay are her beloved son, Robbie Chambless; her brother, Allen Glaser, Jr. (Rene) of Perry; her sister-in-law, Alice Phelps (David); her nephew, Mat Glaser (Cathy); her nieces, Tamara Walden Greene (Nat), and Amy Phelps Fouse (Jon); several great-nieces and great-nephews; and her sweet, devoted friend/caregiver, Dana Bittner. Condolences for the family may be left in the online guestbook at www.watsonhunt.com. Watson-Hunt Funeral Home has been entrusted with the arrangements.

The family of GAY CHAMBLESS created this Life Tributes page to make it easy to share your memories.

Send flowers to the CHAMBLESS family.