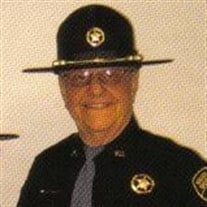 PERRY – Frederick David “Doc” Henzler, Jr. passed away peacefully on Wednesday, January 22, 2020. Services will be on Thursday, January 30, 2020, at Hardison Baptist Church in Byron with the Visitation at 10:00 a.m. and the Memorial Service at 11:00 a.m. In lieu of flowers, the family respectfully requests memorial contributions to Perry Volunteer Outreach, P. O. Box 1824, Perry, GA 31069. Dr. Henzler was born in Philadelphia, PA, January 14, 1929. After college and a training with the US Marine Corps, he pastored several churches in Pennsylvania, Virginia, New Jersey, New York and Georgia, and later was a Southeast Fields Director for Baptist Church Planters. His lifelong interest in sports led him to officiate football, track and field, wrestling, and soccer at both the high school and college levels. He served local law enforcement as chaplain for both the Perry Police and the Houston County Sheriff’s Departments. He was preceded in death by his beloved wife Marie Christina Henzler of 61 years. Left to cherish the memories of Doc are his loving and devoted children, Fredrick David "Rick" Henzler, Mark (Diane) Henzler, Marie Ann (Greg) Hall and Lois Ruth Henzler; his sister, Anna Mae (Lloyd) Wisner of Philadelphia; seven grandchildren; and 11 great-grandchildren. Condolences for the family may be left in the online guestbook at www.watsonhunt.com. Watson-Hunt Funeral Home has been entrusted with the arrangements.

The family of Frederick "Doc" Henzler created this Life Tributes page to make it easy to share your memories.

Send flowers to the Henzler family.