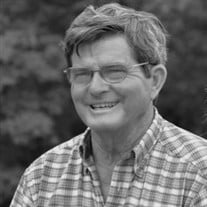 Robert Franklin “Frank” Bledsoe, 73, passed away peacefully at home on Saturday, April 3, 2021, surrounded by his loving family and devoted friends. Services will be held on Tuesday, April 6, 2021, at First Baptist Church of Perry. A Visitation to express love and support for his family and friends will be held at 1:00 p.m., and the Service will begin at 2:00 p.m. with Reverend Jamie Powell officiating. In lieu of flowers, the family respectfully requests memorial contributions to one of the many organizations that were dear to Frank including Perry FFA, 1307 North Ave, Perry, GA 31069 or Friends of Perry Animal Shelter (FOPAS), 204 Kellwood Dr, Perry, GA 31069 or The Westfield School, 2005 US Hwy 41 South, Perry, GA 31069 or Houston County 4-H, 801 Main St, Perry, GA 31069. Frank was born in Vienna to the late Sidney Samuel Bledsoe, Sr. and Eleanor Lucille Wood Bledsoe. From the time he could walk, Frank was right behind his father and brothers on the family farm, learning the trade and soaking in every bit of information he would need for his future as a lifetime farmer. Frank learned and enjoyed raising and showing cattle each year for his FFA project. He was a graduate of Vienna High School’s Class of 1965. He continued his education at the University of Georgia, earning a Bachelor’s Degree in Animal Science from the College of Agriculture and Environmental Science, actively participating as a member of Alpha Gamma Rho, Block & Bridle, and the Ag Honor Society. While there, Frank learned to fly small planes, and his love for flying began. Upon graduation from college, he proudly served our country in the U. S. Army Reserves, joining the 421st QM Company in Ft. Valley. He attended Jump School at Ft. Benning with his Company and earned his Jump Wings after surviving the notorious “Jump Week.” He attended Marigold Flying Service in Mississippi, where he received his pilot’s license, and returned home to Perry, where he began Houston Crop Service, dusting crops for many farmer friends around the state. He continued his work on the family farm, and his love for agriculture led him to begin acquiring property in and around Middle Georgia, primarily in Dooly, Macon, and Houston counties, eventually growing his own farming operation to what it is today. Frank joined the American Agriculture Movement in 1978 and went on strike with thousands of other farmers across the country. Eventually, he drove his tractor with an extensive group of passionate farmers from Georgia all the way to Washington, D.C., up the steps of the U. S. Capitol in the nation’s most famous “Tractorcade.” They were determined for lawmakers to give “100% Parity” to farmers, and just a few short months later, the government agreed to some of their demands, and the farmers began working again. As a farmer of corn, soybeans, pecans, peanuts, and cotton, Frank eventually acquired Tri-Co Peanut and Gin, allowing him to be a part of the process and assist in selling the precious crops that he and other farmers harvested each season. He was a member of Liberty Baptist Church in Dooly County and a faithful attender of First Baptist Church of Perry. Through the years, Frank has been a member of and involved with numerous organizations including Georgia Pecan Association, Staplcotn, Southeast Cotton Growers Association, Southeast Cotton Ginners Association, Peanut Growers Association, Pecan Growers Association, Georgia Cattlemen’s Association, Georgia Agriculture Aviation Association, and National Agriculture Aviation Association. He was a true humanitarian, often helping others without them even knowing it. He was a huge supporter of The Westfield School, Perry FFA, Houston County 4-H, and the youth programs at First Baptist Church of Perry. Frank enjoyed researching and collecting antique tractors, sponsoring, supporting, and participating in the annual Antique Tractor Show at GA National Fairgrounds. Frank was also a conservationist, offering his knowledge and support to Ocmulgee River Conservation and Flint River Conservation. Frank Bledsoe became a legend in his own time throughout his life’s works and accomplishments, leaving behind a legacy of hard work, strong work ethic, generosity, kindness, and love. He didn’t say much, but when he spoke, people listened. And those who knew him, knew that what he said would be meaningful. His dry, witty humor was often revealed when least expected. Left to cherish the memories they made with Frank are his brother and sister-in-law, Sidney, Jr. and Peggy Bledsoe of Henderson; his brother and sister-in-law, Danny and Janice Bledsoe of Hawkinsville; his sister-in-law, Wanda Jordan; his nephews, Blake Bledsoe (Whitney), Bryant Bledsoe (Jamie), and Mack Jordan; his nieces, Becky Bledsoe Sapp (Robert), Juli Tankersley (Hank), Laurel Musselwhite (Keith), and Jamie Montgomery (Ted); his great-nephews, Bryan Bledsoe, Rhodes Bledsoe, Shepherd Bledsoe, and Lawson Bledsoe, Randy Sapp and Tyler Sapp; his great-nieces, Ry Bledsoe, Baker Bledsoe, and Lanier Bledsoe; Allison Halford (Frank's fishing buddy) and her husband, Hamilton; Audrey Evans and Evans Campbell. Frank was preceded in death by his parents; his wife, Jane Jordan Bledsoe; and his special friend, Judy Evans. Condolences for the family may be left in the online guestbook at www.watsonhunt.com. Watson-Hunt Funeral Home has been entrusted with the arrangements.

The family of FRANK BLEDSOE created this Life Tributes page to make it easy to share your memories.

Send flowers to the BLEDSOE family.