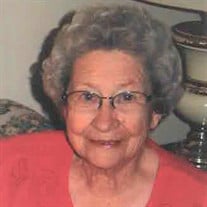 PERRY - Frances H. Bowen, age 96, died Friday, May 24, at Pine Pointe Hospice in Macon. Born in Macon County, GA, to Abner and Odell Hambrick, she had resided in Perry, GA, since 1959. Funeral services will be held on Tuesday, May 28, 2019, at 11:00 a.m. at Memorial Heights Baptist Church in Perry, preceded by visitation at the church from 10:00 to 11:00 a.m. Interment will be in Perry Memorial Gardens immediately following the service. Flowers will be gratefully accepted or memorial donations may be made to an animal rescue shelter, in recognition of Frances’ love for cats, to a food pantry, or to Memorial Heights Baptist Church, 521 General Courtney Hodges Boulevard, Perry, GA 31069. Frances had a servant’s heart and helped many people in many ways. This she demonstrated as a homemaker who enjoyed cooking for her family and friends, with her sour cream pound cake being her specialty; as a cook at the Perry Elementary School lunchroom; and as a member of Memorial Heights Baptist Church, where she taught Sunday School, Vacation Bible School, and Sunbeams and prepared fresh flower arrangements. Frances was preceded in death by her husband, Ray Bowen; daughter, Peggy Simmons; great-granddaughter, Olivia Culpepper; sons-in-law, Jerome Sutton and Milton Culpepper; two sisters; and five brothers, including her older brother Jack who purchased her cherished class ring when she graduated from Ellaville High School in 1940. He was later killed in action during WWII. Survivors include her daughters, Margaret Culpepper and Carolyn Sutton of Perry, and Jackie Riley (Dan) of Macon; son, Francis Bowen (Cathy) of Peachtree City; grandchildren, Lisa Bearden (Randy), Alan Culpepper (Cindy), Todd Simmons (Barbara), Trent Simmons, Travis Simmons, Lori Derhammer (Karl), Keri Hayes (Charles), and Sean Baur; great-grandchildren, Ryan Jordan, Drew Culpepper, Elaina Culpepper, and Elizabeth Derhammer; sisters, Marjorie Moore of Unadilla, and Anne Carroll of Perry; and numerous nieces and nephews. The family is grateful to caregivers Merlin, Betty, Marie, and Joanna and the staff of Pine Pointe Hospice. Condolences for the family may be left in the online guestbook at www.watsonhunt.com. Watson-Hunt Funeral Home in Perry has been entrusted with the arrangements.

PERRY - Frances H. Bowen, age 96, died Friday, May 24, at Pine Pointe Hospice in Macon. Born in Macon County, GA, to Abner and Odell Hambrick, she had resided in Perry, GA, since 1959. Funeral services will be held on Tuesday, May 28, 2019,... View Obituary & Service Information

The family of FRANCES HAMBRICK BOWEN created this Life Tributes page to make it easy to share your memories.

Send flowers to the BOWEN family.