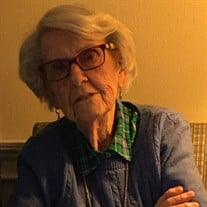 WINTERVILLE, GA – Frances Irby Boone, 94, formerly of Perry, passed away peacefully on Tuesday, May 18, 2021, after a brief illness. Graveside Services will be held on Friday, May 21, 2021, at 11:00 a.m. in Evergreen Cemetery. Friends are welcome to stop by Watson-Hunt Funeral Home on Thursday, May 20, 2021, between 2:00 and 4:00 p.m. to pay their respects. In lieu of flowers, the family respectfully requests memorial contributions to American Heart Association, 5962 Zebulon Road, PMB 359, Macon, GA 31210, or Perry United Methodist Church, 1002 Carroll Street, Perry, GA 31069, or to the charity of the donor’s choice. Frances was born in Dooly County, grew up in south Houston County, and graduated from Perry High School in 1937. She married the love of her life, William Joseph “Billy” Boone. Immediately after high school, Frances accepted a position with Robins Air Force Base in Procurement as a Buyer. She retired after twenty years at RAFB to stay home, begin a family, and raise their children in a loving and encouraging environment. Once the kids were old enough, Frances returned to work, accepting a position as a teacher’s assistant at Tucker Elementary School, where she enjoyed helping educate many young children in Perry. Later, many people saw her when she worked at Perry Drug Company as a clerk part-time, and eventually as a receptionist Dr. Weems’s office in downtown Perry. She was a long-time member of Perry United Methodist Church and enjoyed attending regularly when she could. She never met a stranger, and everyone who knew Mrs. Frances loved her. She was a wonderful southern cook and particularly enjoyed baking pound cakes and cheese straws that she would often give as gifts to friends and neighbors. Her favorite lunches to fix were pimento cheese sandwiches and "drugstore hot dogs." Needlework, especially knitting, was a favorite pastime of Mrs. Frances, and “knitting camp” was enjoyed year after year, every time she could go. She was an avid Georgia Bulldog fan and was very passionate about the football. While she loved tailgating in Athens for over fifty years, once her health began to decline, she had to cheer from home watching the dawgs play on tv. For the last ten years of her life, Mrs. Frances maintained her home in Perry, but lived independently on her daughter’s property in Winterville, just outside of Athens. Left to cherish the memories they made with Mrs. Frances are her daughter and son-in-law, Lisa Boone and Jerry Erwin of Winterville; her son and daughter-in-law, Joe and Rosario Boone of Perry; her nephew, James Walton (Ginny) of Green Acres, FL; and several other extended family members and friends. Mrs. Frances was preceded in death by her parents, Abner Bernard Irby, Jr., and Mattie Pattishall Irby; her beloved husband of nearly 40 years, Billy Boone; and her sister, Gwendolyn Irby Walton. Condolences for the family may be left in the online guestbook at www.watsonhunt.com. Watson-Hunt Funeral Home has been entrusted with the arrangements.

The family of FRANCES IRBY BOONE created this Life Tributes page to make it easy to share your memories.

Send flowers to the BOONE family.