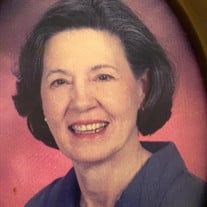 Fort Valley, Georgia Eugenia Houston Redding passed away peacefully at home on August 14, 2021. She was born on October 13, 1933 in Blakely, Georgia to Homer Cyrus and Laura Mock Houston. A memorial graveside service will be held Saturday, August 21, 2021 at 11:00 a.m. at the Blakely Cemetery in Blakely, Georgia. There will be visitation with the family at graveside prior to the service beginning at 10:00 a.m. In lieu of flowers, contributions may be made to Edison Baptist Church, 19530 Hartford St E, Edison, GA 39846 or Fort Valley First Baptist Church, 209 S Miller St, Fort Valley, GA 31030. Eugenia graduated from Damascus High School in Damascus, Georgia followed by business school in Dothan, Alabama. She was baptized at her childhood church, New Hope Baptist Church, Early County, Georgia. Eugenia married Robert Lee Redding, Sr. in 1954. They were married for 43 years until Robert’s death. Eugenia was a businesswoman, an entrepreneur, and a woman of strong Christian faith. She lived most of her adult life in Edison, Georgia where she and her husband, Robert, worked in a local department store. She eventually opened her own successful women’s clothing business, Edison Cotton Company. Eugenia was an active member of Edison Baptist Church, and in later years, moved to Fort Valley, Georgia where she was a member of Fort Valley First Baptist Church. She was an earnest student of the Bible and had a particular love of singing in the choir. Eugenia was a devoted wife, mother, and grandmother. She was part of a large extended family having had ten siblings, many of whom lived near her. She treasured time with all of her family. She is survived by her two children: Robert Lee Redding Jr. (Laura) of Washington, D.C. and Beth Redding Cleveland (David) of Fort Valley, Georgia and seven grandchildren: Emma Cleveland Torrence (Matt), Thomas Redding Cleveland (Ashlee), David Hendricks Cleveland Jr., William Feehan O’Neal (Ansley), Katherine Redding Vaughn (Christopher), Robert Hamilton Redding, and William Houston Redding. She was also great grandmother to Wilder, Alma, and Cyrus. She is also survived by her brother and sister-in-law, Stanley and Linda Houston; sister, Betty Houston Strickland, and sisters-in-law, Betty and Claire Houston, and many nieces and nephews. She is preceded in death by her parents, her husband, Robert, and heR siblings: Hilda King (J.B.), Bob Houston (Rosa), Bill Houston (Laverne), Charlie Houston, Bruce Houston, Homer Houston, Jr. (Samolene), Chester Houston (Thelma), and Max Houston (Mae). The family would like to express a special thank you to her dedicated and loving caregivers Constance Bartlet, Mary Francis Baker and Patsey Causey. Condolences for the family may be left in the online guestbook at www.watsonhunt.com. Watson-Hunt Funeral Home has been entrusted with the arrangements.

Fort Valley, Georgia Eugenia Houston Redding passed away peacefully at home on August 14, 2021. She was born on October 13, 1933 in Blakely, Georgia to Homer Cyrus and Laura Mock Houston. A memorial graveside service will be held Saturday,... View Obituary & Service Information

The family of EUGENIA HOUSTON REDDING created this Life Tributes page to make it easy to share your memories.