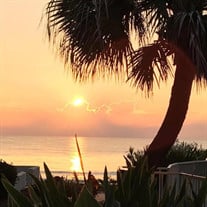 CHIPLEY, FL/BYRON, GA – Ernest William "Ernie" Cox, 84, passed away suddenly and unexpectedly on Sunday, May 3, 2020, after suffering a cardiac event at the home of his son in Byron, Georgia. A Private Memorial Service will be held for the family later this week at Ernie’s home in Chipley, Florida. In lieu of flowers, the family respectfully requests memorial contributions to American Parkinson Disease Association, 12 Executive Park Dr NE, Atlanta, GA 30329. Ernie was born in Danville, Kentucky, to the late Rufus and Nancy Cox. He lived for over 50 years in the Panama City, Florida, area where he was a sheet metal mechanic and owned his own HVAC business and other industrial businesses through the years. Ernie loved to go fishing and spent many hours, days, and even weeks at a time in Chipley at his fishing camp that eventually became his permanent home. He lived a long healthy life until he was diagnosed with Parkinson’s Disease a few years back. In 2018, he came to Middle Georgia to stay with his son, Jeff, and recover from surgery. However, when his health continued to decline, Ernie decided to stay in Georgia and receive treatment and therapy from Encompass Home Health and his favorite therapist, Brian, who specializes in Parkinson’s treatment. Ernie was a big fan of the Miami Dolphins, the Dallas Cowboys, and the Atlanta Braves. He enjoyed watching westerns on television as well as ballgames, even if he had seen them before. He was preceded in death by his wife of over 20 years, Margaret Turner Cox; his brothers, Dennis, Bruce, and Jim Cox; his sister, Shirley; and the mother of his sons, Joyce Palmer Cox. Left to cherish the memories they made with Ernie are his devoted sons, Kenny Cox (Darla Fontenot) of Panama City, Florida, and Jeff Cox (Andrea Langston) of Byron; his daughters, Debbie Williams (Davey) and Kathy Cox (Don); his grandchildren, Matt Cox (Brittany), Kristy Cox Ford (Cole), Coley Cox, Brenton Cox, Jessica Cox, Bryce Albritton (Alex), and Emma Albritton (Joseph); 2 sisters, Ruth and Louise; and many nieces and nephews. Condolences for the family may be left in the online guestbook at www.watsonhunt.com. Watson-Hunt Funeral Home has been entrusted with the arrangements.

CHIPLEY, FL/BYRON, GA &#8211; Ernest William "Ernie" Cox, 84, passed away suddenly and unexpectedly on Sunday, May 3, 2020, after suffering a cardiac event at the home of his son in Byron, Georgia. A Private Memorial Service will be held for... View Obituary & Service Information

The family of ERNIE COX created this Life Tributes page to make it easy to share your memories.

Send flowers to the COX family.