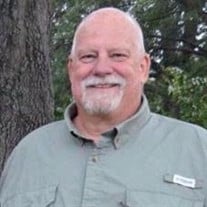 HAYNESVILLE – Edwin Hugh “Ed” Fleming, 67, passed away peacefully on Saturday, April 6, 2019, at his residence after an extended illness. Visitation will be held on Saturday, April 13, 2019, from 4:00 until 5:00 p.m. in the Chapel at Watson-Hunt Funeral Home. A Memorial Service will be held at 5:00 p.m. after the visitation at the funeral home. Friends and family are invited to make plans to attend a Celebration of Ed’s Life that will be held immediately following the memorial service at 105 Bear Branch Road, Kathleen, GA 31047. At the family’s request, everyone in attendance is asked to dress casual, just the way that Ed would want it. Ed was born in Jonesboro, Arkansas, to the late Hugh B. and Billie Hamilton Fleming. He proudly served our country in the US Navy. He worked in Civil Service as a Quality Control Officer with the C-5 Division at Robins Air Force Base for over 30 years. Through the years and upon his retirement, Ed enjoyed being outdoors, hunting and fishing, and especially when he was riding his Harley-Davidson. Anyone who rides a Harley and rode with Ed is invited to park in front of the Funeral Home where Ed’s bike will be parked, as well. He was preceded in death by his parents and his brother, Bill Hamilton. Survivors include his son and daughter-in-law, Jesse and Jaime Fleming of Kathleen; his grandchildren, Drake and Ty Fleming, and Chance and Parker Ragan; and his sister, Donna Kay Beck of Gulf Breeze, Florida. Condolences for the family may be left in the online guestbook at www.watsonhunt.com. Watson-Hunt Funeral Home has been entrusted with the arrangements.

The family of Edwin Hugh Fleming created this Life Tributes page to make it easy to share your memories.

Send flowers to the Fleming family.