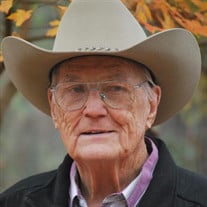 PERRY, GA - Edward Graves Butler, 95, passed away peacefully early Friday morning in Perry, Georgia, on August 20, 2021, after an extended illness. A Funeral Service will be held on Monday, August 23, 2021, at 11:00 a.m. at Watson-Hunt Funeral Home, 1208 Main Street, Perry, Georgia. A Private Burial will be held at Kennesaw City Cemetery in Kennesaw Georgia. He will be laid to rest beside his loving wife of nearly fifty years, Julia Elizabeth Kirk Butler. Edward was born in Turin, Georgia, to the late Edward Lewis Butler and the late Annie Lynn Graves Butler. A graduate of Moreland High School, he continued his education through East Texas Baptist University and the New Orleans Baptist Theological Seminary where he obtained a Master’s Degree. He then spent his career serving in the ministry and as a prison chaplain. Upon his retirement, he dedicated the rest of his days to enjoying his grandchildren and his passion for Jesus and politics through his independent writing. Left to cherish the memories they made with Edward are his children, Joseph Butler of Arkansas, Monica Goldsmith (Butler) of Dacula, Georgia, Kellie Holcomb (Butler) of Lebanon, Tennessee, and Marcy Maynor (Butler) of Perry, Georgia, along with their spouses Warren Goldsmith, Scott Holcomb, and Marc Maynor. Edward is also lovingly remembered by his eighteen grandchildren, three great-grandchildren, and many nieces and nephews. He was preceded in death by his wife, Julia Elizabeth Kirk Butler; his parents; and eight brothers and sisters. Watson-Hunt Funeral Home has been entrusted with the arrangements and requests that condolence messages be left in their online guestbook at www.watsonhunt.com.

The family of EDWARD GRAVES BUTLER created this Life Tributes page to make it easy to share your memories.

Send flowers to the BUTLER family.