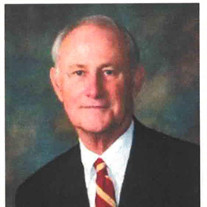 PERRY - Edward Morgan Beckham, II, 81, passed away peacefully at his home on Sunday, July 12, 2020, after an extended illness. Graveside Services will be held on Wednesday, July 15, 2020, at 11:00 a.m. in Evergreen Cemetery. In lieu of flowers, the family respectfully requests memorial contributions to First Baptist Church of Perry, 1105 Main Street, Perry, GA 31069, or The Westfield School, 2005 US Hwy 41, Perry, GA 31069, or Stratford Academy, 6010 Peake Road, Macon, GA 31220. Ed was born on April 8, 1939, to the late William Eugene and Fanita Cobb Beckham. As a young athlete at Perry High School, he developed a love for basketball under the direction of Coach Eric “Fessor” Staples and was on the 1956 State Championship basketball team. Time spent learning the game of golf early in life led him to help win the 1955 and the 1956 State Championship title for the Golf Team, as well, still holding the title as the last golf champs of Perry High School. Upon graduation with the Class of 1957, Ed went to college and earned a Bachelor’s Degree from Georgia Tech. He then enlisted and proudly served our country in the U.S. Navy before returning to Perry to take over the family business, joining with his brother to form Beckham Brothers Distributors. The relationship Ed had with his brother, Billy, held a firm foundation from their youth, but as this business formed, so began a lifetime of not only brothers, but co-owners, co-workers, and best friends. There was never a cross word between the men through the years, even as Billy maintained the bookkeeping and Ed continuously “checked on things” at the various fuel locations in Middle Georgia and at the farm. Ed was a long-time member of First Baptist Church of Perry and was a member of the Buice Sunday School Class. He was very active in the community, sharing his ideas for improvement and his knowledge of business by serving on various Boards of Directors including Ag GA Farm Credit from 1978 to 2016, The Westfield School as a Founding Board Member, the Military Affairs Committee at Robins Air Force Base through the Perry Chamber of Commerce, and Crossroads Bank as a Founding Board Member, as well as others throughout his lifetime in Perry and Houston County. Ed loved antiques and was always on the search for the next best piece of furniture at Scott’s Antiques and his own Uncle’s shoppe, Arthur Cobb Antiques, among many other of his favorites. An avid golfer most of his life, he was so proud of his last round of golf at age 76 with his 14-year-old grandson, Beck, as Ed got a hole-in-one at Houston Lake Country Club, the place where he was actually the final living Charter Member and had spent a great deal of time enjoying the game and the atmosphere with his family and friends his whole life. A true Southern Gentleman he was, and was one of Perry’s finest examples of faith, happiness, and success, he will be greatly missed. Left to cherish the memories they made with “Big Ed” are his loving and devoted wife of nearly 20 years, Ella Ann Beckham of Perry; his daughter and son-in-law, Beth and Bill Henderson of Macon; his son and daughter-in-law, Ed, III, and Tamatha Beckham of Perry; his step-son and wife, Bob and Kollyn Lawson, also of Perry; his grandchildren, who lovingly referred to him as “Biggie” and from whom he gained much insight about the current world and found much pleasure, Molly Morgan Jones, Maimee Jane Henderson, Ed “Beck” Beckham, IV, Jimmy Brant Beckham, Kerri Ann Lawson, Ben Lawson, and Rooks Lawson; his brother and sister-in-law, W.E. “Billy,” Jr. and Claire Beckham; and several nieces and nephews. He was preceded in death by a step-son, Hugh Lawson III. The family is grateful for the care and compassion shown to Mr. Ed and his family by his caregivers, especially Shennando Lester, Ramona Askew, and the nurses and staff of Hospice Care Options. Condolences for the family may be left in the online guestbook at www.watsonhunt.com. Watson-Hunt Funeral Home has been entrusted with the arrangements.

PERRY - Edward Morgan Beckham, II, 81, passed away peacefully at his home on Sunday, July 12, 2020, after an extended illness. Graveside Services will be held on Wednesday, July 15, 2020, at 11:00 a.m. in Evergreen Cemetery. In lieu of flowers,... View Obituary & Service Information

The family of EDWARD M. BECKHAM, II created this Life Tributes page to make it easy to share your memories.