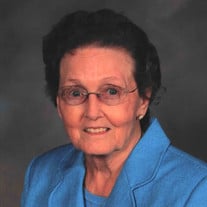 MARSHALLVILLE – Edith Smith Willard, 95, formerly of Perry, passed away peacefully on Sunday May 23, 2021, in The Oaks Nursing Home where she had lived for the past five years. Visitation will be on Wednesday, May 26, 2021, from 9:00 until 10:45 a.m. in the Chapel at Watson-Hunt Funeral Home. Private Graveside Services will be held in Perry Memorial Gardens where she will be laid to rest beside her beloved husband. In lieu of flowers, the family respectfully requests memorial contributions to Cross Point Baptist Church, 645 Perry Parkway, Perry, GA 31069, or Perry Volunteer Outreach (PVO), 801 Commerce Street, Perry, GA 31069. Edith was born in Oklahoma City, Oklahoma, to the late Charles and Janie Musteen Smith. As a teenager, she quit school after the tenth grade, respecting her mother’s wishes to get a job to help support her brothers through school. Edith accepted a position as a Secretary during World War II at Tinkerfield AFB. She met and married the love of her life, Jesse James Willard, Sr., and the couple moved to various locations throughout the United States while he served in the U.S. Army Air Corps which became the U.S. Air Force. A homemaker most of her life, wherever they lived Edith continuously worked to create a loving home and encouraging atmosphere in which to raise their seven children. Often, she would be home alone raising their children while Jesse was remotely stationed, proudly serving our country. Edith and Jesse moved to Perry in 1963, when he was transferred to Robins Air Force Base, and they never left. She was a master quilter and spent time making special quilts through the years. She once made a Cathedral Quilt that hung for a while in the Georgia State Capitol in Atlanta, and that made her so proud. Edith was actively involved in church and was currently a member of Cross Point Baptist Church, and was a former member and served as President for several years of the Homemakers Club of Houston County. Once Jesse retired from the military, he built and operated Willard’s Auto Repair Shop on the same property as their home. Edith would go to work cooking and cleaning when Jesse went to work in the shop. She would serve him lunch every day, then when he returned to the shop, she would work in the yard, nurturing and pampering her hundreds of precious rose bushes. She was thrilled to even assist in naming some of the varieties that she grew and would often share roses with her neighbors and many friends, which brought her great joy. Mrs. Edith was a very independent lady all of her life. She even maintained her home for many years after the untimely loss of her husband in 2005, and was able to stay there until she was nearly ninety years old. Her life was filled with love, and she has left a wonderful legacy for her dear family. Left to cherish the memories they made with Mrs. Edith are her children, Jane Perfect of Elko, Richard Willard (Patty) of Murfreesboro, TN, Jesse Willard, Jr. (Sheila) and Tommy Willard (Betsy), both of Perry, Dale Willard of Mount Juliet, TN, and Mike Willard (Lois) of Perry; nineteen grandchildren; a host of great-grandchildren and great-great-grandchildren; and several nieces, nephews, great-nieces, and great-nephews. Mrs. Edith was preceded in death by her parents; her beloved husband of sixty-one years, Jesse Willard, Sr.; her brothers, Bob Smith and Paul Smith; her son-in-law, Ted Perfect; and her son, Philip Willard. Condolences for the family may be left in the online guestbook at www.watsonhunt.com. Watson-Hunt Funeral Home has been entrusted with the arrangements.

MARSHALLVILLE &#8211; Edith Smith Willard, 95, formerly of Perry, passed away peacefully on Sunday May 23, 2021, in The Oaks Nursing Home where she had lived for the past five years. Visitation will be on Wednesday, May 26, 2021, from 9:00 until... View Obituary & Service Information

The family of EDITH WILLARD created this Life Tributes page to make it easy to share your memories.

Send flowers to the WILLARD family.