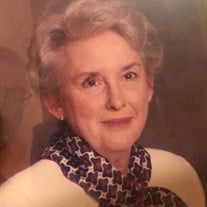 PERRY – Edith Grace Mitchell Storey, 87, passed away on October 23, 2019, 36 years to the day after her mother left this world for the next one. Earlier this month, Edith mentioned in conversation with her brother, Joe, that she would be seeing her mama really soon. Though she had not yet had the stroke that took her to heaven’s gate, she had seen a glimpse of the near future and faced it with hope. Born in 1932 when women wore their hair in Hollywood waves and men slicked theirs back with Brylcreem, Edith was the fourth child and the third (and last) daughter born to Naomi Carter and James Powell Mitchell. Within the next 15 years, the Mitchell family added four more boys, bringing the total to seven children, following the tragic loss of their oldest daughter in the mid 1930’s. Even in her youth, Edith entertained family and friends by playing the piano. Throughout her life, she played for church and for loved ones. Memories of singing around the piano as Edith played span decades and generations; oh “the joy we shared as we tarried there …!” After graduating from Brinson High School, Brinson, GA, in 1948, Edith went to work as a telephone operator before marrying in 1951. Soon after, she graduated from beauty college and eventually had her own hair salon in her home. Nieces and nephews, children and grandchildren, made magical memories in that garage-made-parlor full of beauty. Plastic curlers became finger puppets, perm rods took rubber-band wars up to a whole new level, and few could resist climbing into her chair for a dizzying spin. Edith cut and styled from bouffant to mullet, from pompadour to buzzcut, and from Greg Brady tight perm to Farrah Faucette feathered bangs. But in her beauty shop, Edith did much more than hair; Edith made magic. Clients and friends might arrive burdened, but they left hopeful. They might come beat down, but they left built up. They might enter feeling unworthy, but they left feeling loved. As an adult, Edith developed her artistic skills through painting. Seeing the beauty in the world was an innate gift of Edith’s, so it only made sense that she would excel at translating natural wonders into artistic masterpieces. Her painting was not just a leisurely hobby. She took her craft seriously and worked with a variety of media—acrylics, oil, watercolor—and surfaces—fabric, wood, metal—to create lasting representations of the world around her. She realized the value of her work, so while she gifted plenty of her works of art, she sold a good many too. Edith and beauty: they worked well together. Edith’s first marriage gave her two children, four grandchildren, seven great-grandchildren, and 5 great-great grandchildren. As matriarch of her family, Edith saw to it that her beloveds knew Jesus Christ. Each night up until very recently, the family—all who were close enough to make it—circled around Edith for family devotions and prayer time. If Edith said she would pray with you, she meant it--she and her whole family would. Edith’s second marriage to George Storey (1987-his death in 1998) brought her four step-children and 11 step-grandchildren. It also brought her the love of her life. Shortly after they were married, she remarked, “We love taking care of each other so much that we bump into each other in the kitchen trying to get the other one coffee!” Following George’s passing, her grief was surpassed only by her gratitude for the gift of this late-in-life love. Once during a difficult time in her life, Edith remarked about her circumstances, “You know, this is not what I had planned for my life, but just look at the blessings around me!” She gestured around her one room apartment, “When I set my easel right there, the light is just perfect for painting! And look at the yard. It has plenty of room for my little dog to run around and play. And when I pull this curtain, I have two rooms, not one.” Because she saw the beauty, everyone else could see it too. “Pray for what you want,” she told us. “Then trust God to give you what you need.” Services will be held on Tuesday, October 28, 2019, in the Chapel at Watson-Hunt Funeral Home with the visitation beginning at 2:00 p.m. followed by the funeral at 3:00 p.m. Interment will be in Perry Memorial Gardens immediately following the service. Rev. Dr. Harold Mitchell, brother of the deceased, will officiate the ceremony. All are welcome to attend and celebrate Edith’s life.

PERRY &#8211; Edith Grace Mitchell Storey, 87, passed away on October 23, 2019, 36 years to the day after her mother left this world for the next one. Earlier this month, Edith mentioned in conversation with her brother, Joe, that she would... View Obituary & Service Information

The family of Edith Hair Storey created this Life Tributes page to make it easy to share your memories.

Send flowers to the Storey family.