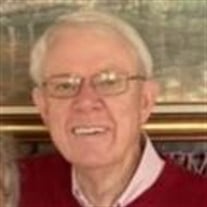 Earnest Eugene “Butch” Skinner, Jr. 76, passed away on Friday, February 19, 2021, after a brief illness. Funeral Services will be held on Tuesday, February 23, 2021, at 11:00 a.m. at Perry Presbyterian Church. Immediately following the funeral, interment will be in Perry Memorial Gardens. Considering the current national pandemic, please wear a mask and observe social distancing when possible for the safety of everyone there. In lieu of flowers, the family respectfully requests memorial contributions to Perry Presbyterian Church, 1111 Second Street, Perry, Georgia 31069. Butch was born in Macon, Georgia, to the late Earnest Eugene Skinner, Sr. and Macy Mathews Skinner. He graduated from Perry High School in 1962. He was a member of the 1962 PHS State Championship teams in baseball and basketball. After high school, Butch earned an Associates’ Degree from Middle Georgia College. He was a member of Perry Presbyterian Church where he served as a Deacon and an Elder. God and family were most important to him. He had been employed at Pabst Brewing Company, Cleveland Mechanical, and Hammock Industrial. He loved working in the yard, watching sports, and taking family trips, especially to the beach. Most of all, he loved spending time with his wife of 54 years, his children, and his grandchildren. Left to cherish the memories they made with Butch are his loving and devoted wife, Fronzie Acres Skinner; his children, Amy Beamon (Marty), Christy Thomas (Dwain), Eric Skinner (Jill), and Nathan Skinner (Tara); his grandchildren, Landon Beamon, Cassidy Beamon, Cade Thomas, Sophie Skinner, Jackson Skinner, Evan Skinner, and Emerson Skinner; his sister, Susan Skinner NeSmith (Harvey); and his nephew, Matt NeSmith. Butch was preceded in death by his parents. Condolences for the family may be left in the online guestbook at www.watsonhunt.com. Watson-Hunt Funeral Home has been entrusted with the arrangements.

The family of EARNEST EUGENE "BUTCH" SKINNER, JR. created this Life Tributes page to make it easy to share your memories.

Send flowers to the SKINNER, family.