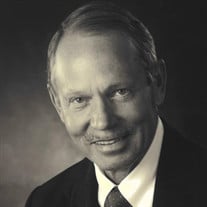 PERRY – Dr. Dudley Benjamin Christie, Jr. passed away peacefully on Tuesday, April 19, 2022. He was 75 years old. Funeral services will be held on Sunday, April 24, 2022, at First Baptist Church of Perry. Visitation will be at 2:00 p.m., and the Funeral will be at 3:00 p.m. with Reverend Jamie Powell officiating. Interment will be in Perry Memorial Gardens immediately following the service. Dudley was born on January 16, 1947, in Jesup, Georgia, He grew up in Griffin, went to Griffin High School, was a member of the golf team, and graduated in 1965. He was accepted and went to University of Georgia where he was a member of Pi Kappa Phi fraternity and earned his Bachelor’s Degree in Chemistry in 1969. Dudley went on to further his education in Memphis at Southern College of Optometry. He soon met the love of his life, Linda Heathcott, and the couple married in 1970. In 1973, he graduated from SCO, and Dr. and Mrs. Christie moved to Griffin where he worked for a local optometrist for a few years. In 1976, the couple moved to Perry, and he began practicing in Middle Georgia as Christie Eye Care, gradually opening optometric locations in Perry, Cochran, Warner Robins, Dublin, Milledgeville, and Fort Valley. Dr. Christie was a long-time member of the American Optometric Association, as well as the Georgia Optometric Association, and served for four years as President of the Georgia State Board of Optometry, to which he was appointed by the Governor. During the 1980’s, Dr. Christie became one of the major investors of Athens Cellular, the original cell phone provider in Athens, Georgia, which was purchased by Pacific Telesis and eventually acquired by Bell Atlantic Mobile. That experience gave him the knowledge and means to become one of the principal owners of the Cellular One franchise in South Carolina in the early 1990’s, which was also acquired by Bell Atlantic Mobile at which time was combined with other properties to form Verizon. Dr. Christie then helped to found International Communication Group, of which he was President, and secured the license to provide wireless phone service throughout the Republic of Uzbekistan. That business venture was owned by the Government of Uzbekistan (49%) and International Communication Group (51%), and the cellular company was called Uzdunrobita, where Dr. Christie was the Chairman of the Board. Uzdunrobita was eventually sold to MTS, a Russian cellular operation with nearly six million subscribers. His love of the game of golf and the skills he developed through the years led him to encourage his children to play from a young age. Dudley would spend lots of time on the course with them, taking time to analyze and learn from each hit how to improve their swing and do better next time. He began grooming his daughter, Whitney, to play professionally when she played on the high school golf team as the only female representing the school. Dudley was thrilled when she accepted the scholarship at University of Georgia to be on the Women’s Golf Team. He followed her the four years that she was a Lady Dog, walking the courses with her as often as possible, and supporting her to the SEC and the National Championships in 2001. Dr. Christie continued his optometry practice in 2002, and has been working full-time since then seeing patients until his health began to decline in the last few months. He loved the people who worked with him and wanted to teach them as much as they were willing to learn, improving on their job skills and increasing their self-confidence while serving patients. He was truly a teacher at heart. Dudley loved his family and enjoyed spending time with his children and grandchildren. He enjoyed exercising and running. He was a member of First Baptist Church of Perry, where he served for many years as an usher and was a member of the Avon Buice Sunday School Class. Over the last few months, Dudley developed a very special bond with the best companion anyone could know – his two Afghan Hounds. He was so proud of their many awards. Dolce and Prada rarely left his bedside and proved to be the answer to many prayers. They were the calming influence bringing peace to him like never before. For this reason, the family respectfully asks that in lieu of flowers, memorial contributions be made to honor this rare and wonderful canine breed that meant so much to Dudley, AKC Canine Health Foundation, 8051 Arco Corporate, Suite 300, Raleigh, North Carolina 27617 or AHRSC, Afghan Hound Rescue of Southern California, Inc., c/o Sandy Blount, 108 East 5th Street, San Dimas, California 91773. Dudley was preceded in death by his parents, Dudley Benjamin Christie, Sr. and Hazel Lee Mixon Christie. Left to cherish the memories they made with Dudley are his loving and devoted wife of over fifty years, Linda Heathcott Christie of Perry; his children, Dr. D.B. “Benjie” Christie, III (Dr. Amy) and Cole Christie (Anna), both of Macon, and Whitney Christie Mantooth (Jon) of Watkinsville; his grandchildren, Griffin, Blair, Amelia, Mixon, and Mimi; his brother Dr. Hugh Christie (Jan) of Griffin; his sister-in-law, Lisa Heathcott Hondlenk (Duane) of Orlando, FL; and three nieces and their families. Condolences for the family may be left in the online guestbook at www.watsonhunt.com. Watson-Hunt Funeral Home has been entrusted with the arrangements.

The family of DR. DUDLEY B. CHRISTIE, JR. created this Life Tributes page to make it easy to share your memories.