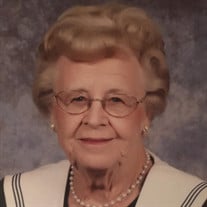 HAYNESVILLE, GA – Dorothy Hutcheson Joiner, 90, passed away peacefully on Good Friday, April 19, 2019. Graveside Services will be held on Monday, April 22, 2019, at 11:00 a.m. in the Cemetery at First Baptist Church of Haynesville. The family will greet friends in the church sanctuary from 10:00 a.m. until the time of the graveside service. Mrs. Joiner was born in Toombs County and had lived in Houston County since 1952. She was the daughter of the late Mode and Ethel Bazemore Hutcheson. Mrs. Joiner was retired from Civil Service at Robins Air Force Base. She was a longtime member of First Baptist Church of Haynesville where she was a member of the Tubby Fowler Sunday School Class. She was preceded in death by her loving and devoted husband, Austin Calvin Joiner; and her brother, Garland Hutcheson. Left to cherish the memories they made with Dorothy are her children, Janice Seymore (Butch) of Perry, and Allen Joiner (Tonia) of Haynesville; her grandchildren, Jenny Rodenroth (Donn), Michael Turrell (Laurie), Melissa Phagan (Marc), Jessica Watson (Chris), Elizabeth Joiner, David Joiner (Katie Lynn), Meagan Richardson (Mark), and Austin Joiner (Eliza); her great-grandchildren, Malcom Richardson, Calvin Joiner, Carter Kilpatrick, Emily Sanders, Erin Rodenroth, Evan Rodenroth, Elizabeth Rodenroth, Baleigh Turrell, Carleigh Turrell, Bryce Phagan, Brock Phagan, Levi Watson, and Chase Watson. Condolences for the family may be left in the online guestbook at www.watsonhunt.com. Watson-Hunt Funeral Home has been entrusted with the arrangements.

The family of Dorothy Hutcheson Joiner created this Life Tributes page to make it easy to share your memories.

Send flowers to the Joiner family.