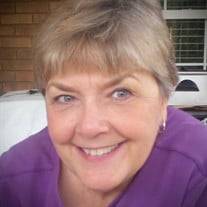 PERRY- Dianne Elizabeth Barron Scruggs, 74, passed away peacefully just after midnight on Tuesday, February 18, 2020. Visitation will be on Thursday, February 20, 2020, from 5:00 until 7:00 p.m. at Watson-Hunt Funeral Home. Funeral Services will be on Friday, February 21, 2020, at 11:00 a.m. in the Chapel at Watson-Hunt Funeral Home. Burial will be at 2:00 p.m. at the Pavilion in Andersonville National Cemetery. At Dianne’s request, flowers should be omitted and memorial contributions made to Perry Players, 909 Main Street, Perry, Georgia 31069. Dianne was born in Atlanta to the late Laura and Bill E. Barron. Having been raised in a military family, Dianne was fortunate to live all around Europe and in various places within the continental U.S. While her father was stationed in England, she met and married the love of her life, Ronnie Scruggs, who was active military, himself. She continued to travel as a military wife, living in Alaska, Washington, D.C., and finally settled in Perry, Georgia. Dianne began working for the United States Postal Service in Alaska, transferred to Washington, D.C., and retired while working in Perry after 30 years of service. She is well-remembered for being the “walking mail lady” who carried and delivered mail all around downtown Perry. Dianne was musically gifted playing the clarinet and singing, which she did quite often. She was a member of the Sweet Georgia Sound Chapter of the Sweet Adelines International. She was an active member at Perry United Methodist Church, where she was in the Sanctuary Choir, the Joy Choir, and several Bible Study groups. She also enjoyed and was very talented as an actress, having performed in a multitude of plays and musicals produced by Center Stage for Christ and Perry Players. While involved on stage, Dianne also put her hobby of painting to good use by often assisting with set plans, development, and construction. She proudly designed several elaborate and beautiful costumes for numerous events, too. Dianne spent a great deal of time throughout her life painting on canvas, gardening and creating the most beautiful yard for her family and friends to enjoy, caring for her houseplants, and having fun with her four-legged forever friend, Daisy, her favorite dog. Dianne was preceded in death by her parents, Bill and Laura Myers Barron; and her beloved husband of forty-one years, Charles Ronald Scruggs. Left to cherish the memories they made with Dianne are her loving and devoted daughters and sons-in-law, Char and David Mann of Mountain Green, Utah, and Sandy and Ed Henke of Gainesville, Georgia; her grandchildren, Ansley Sirmans, Sarah Dunn, and Hannah Dunn; one great-granddaughter, Luca Archuleta; her sister, Barbara Barron Cotton (Don) of Conyers; and her companion of the past ten years, Robert Batchelor of Perry. Condolences for the family may be left in the online guestbook at www.watsonhunt.com. Watson-Hunt Funeral Home has been entrusted with the arrangements.

The family of Dianne Elizabeth Barron Scruggs created this Life Tributes page to make it easy to share your memories.

Send flowers to the Scruggs family.