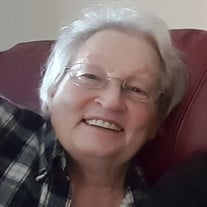 PERRY, GA – Diana Sue Donaldson Pumphrey, 76, passed away peacefully on Tuesday evening, January 18, 2022, after an extended illness. There will be no local memorial services. Diana was born on June 5, 1945, to the late Edward Burl Donaldson and the late Edith Matilda Lee Donaldson in Weston, West Virginia. In 1964, she married the love of her life, Kenneth Pumphrey. Always a homemaker, Diana worked to create a loving and caring environment for her family. Through the years, she grew to love sewing and became a master seamstress and an impeccable quilter. She had a great sense of humor, enjoyed playing card games, and was the most competitive one in the family. Diana loved Jesus, and she loved her family unconditionally, just as Jesus loved her. She was a member of North Ridgeville Church of God in North Ridgeville, Ohio. Diana enjoyed cooking, especially for her children and grandchildren. Having moved from Columbia Station, Ohio, she and Ken had lived in Perry, Georgia, for the past 10 years. Diana was preceded in death by her parents and her brother, Edward Donaldson. Left to cherish the memories they made with Diana are her loving and devoted her husband of 58 years, Ken Pumphrey of Perry, GA; her children, Michele Kanzeg (Earl) of Sullivan, Ohio, Debbie Jackson (Rick) of Pawley’s Island, SC, and Ken Pumphrey (Kim) of Dallas, GA; and her grandchildren, Hunter Kanzeg, Elizabeth Kanzeg, Rebekah Stidd, and MacKenna Stidd. Condolences for the family and special memories about Diana may be left in the online guestbook at www.watsonhunt.com. Watson-Hunt Funeral Home in Perry, GA, has been entrusted with the arrangements.

PERRY, GA &#8211; Diana Sue Donaldson Pumphrey, 76, passed away peacefully on Tuesday evening, January 18, 2022, after an extended illness. There will be no local memorial services. Diana was born on June 5, 1945, to the late Edward Burl Donaldson... View Obituary & Service Information

The family of DIANA PUMPHREY created this Life Tributes page to make it easy to share your memories.

Send flowers to the PUMPHREY family.