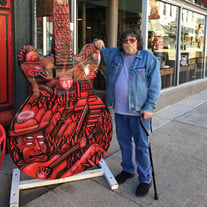 PERRY – Conrad C. Curtis, 64, passed away suddenly and unexpectedly on Saturday, October 26, 2019. Memorial Services will be held on Friday, November 1, 2019, at 11:00 a.m. in the Chapel at Watson-Hunt Funeral Home. The family will receive friends one hour prior to the service, from 10:00 until 11:00 a.m. Conrad was born in Oak Ridge, Tennessee, to the late Hobart and Barbara Curtis, and moved to Perry, Georgia, in 1989 to be near his sister, Linda. A quiet and reserved gentleman, Conrad met his soulmate, Libby, and was married to her for 22 years. He was a self-employed millwright and a member of Carpenters and Millwrights Union 1263 in Atlanta. A life-long fan of the University of Tennessee Volunteers, he loved rock music and going to concerts. He enjoyed spending time outdoors, especially working on his 1970 Duster, a car that had actually belonged to his mother in its glory days. Conrad was preceded in death by his parents; his siblings, Bruce Curtis, George Curtis, Carol Monroe, and an infant sister, Kathleen; and his brother-in-law, Gary. A loving husband, father, and grandfather, he will be dearly missed by all those who knew and loved him. Left to cherish the memories they made with Conrad are his loving and devoted wife, Libby Curtis of Perry; his children, Michael Curtis of Tennessee, Kenneth Curtis (Ashley) of Macon, Brandon Curtis (Brittani) of Warner Robins, and Joey Foreman (Jennifer) of Gainesville, Texas; 5 grandchildren; his brother, Junior Curtis (Gwen) of Arkansas, and Linda Tate of Tennessee; and several nieces and nephews. Condolences for the family may be left in the online guestbook at www.watsonhunt.com. Watson-Hunt Funeral Home has been entrusted with the arrangements.

The family of Conrad Curtis created this Life Tributes page to make it easy to share your memories.

Send flowers to the Curtis family.