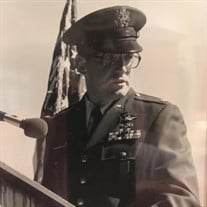 Colonel Richard Brychcy, USAF, Retired, 68, of Perry, unexpectedly passed away on Tuesday, September 15, 2020. A Celebration of Life with Military Honors, will be held at Watson-Hunt Funeral Home on Saturday, September 19, 2020, at 11:00 a.m. with Pastor Richard Azbell officiating. The family respectfully requests, in lieu of flowers, that donations be made in his name to the Tucker Elementary School Family Fund, 1300 Tucker Road, Perry, Georgia 31069. The Family Fund allows teachers to provide families of Tucker Tigers with necessities and essential items during times of urgent need. Richard was born in Rochester, New York, to John L. and Janina Borowik Brychcy. He attended R.L. Thomas High School in Webster, New York, where he met his high school sweetheart and love of his life, Linda Ann Thompson. He went on to receive his Bachelor of Arts from Syracuse University in Political Science, where he was the President of his fraternity and a successful Lacrosse player. He later attained his Master of Arts degree from Central Michigan University. Richard proudly served our country in the U.S. Air Force, which allowed him to travel the country with Linda. During those travels he met many cherished friends. Richard devoted his life to his country and his family. He loved spending time with his grandchildren and traveling to be with his older daughter, Stefanie, in Connecticut. He enjoyed wine and was in a local wine tasting group. Richard enjoyed making his own wine creations with Darlene and friends, and they traveled to wine competitions often. Richard retired as a Colonel from the Air Force after twenty years of dedicated service. He further spent twelve years at Lockheed-Martin as a Program Senior Manager. Richard was preceded in death by, his wife of forty-two years, Linda Ann Thompson Brychcy, and his father, John L. Brychcy. Left to cherish the memories they shared with Richard are his daughters, Megan R. Sweat, of Perry, Georgia, Stefanie L. Rubino of Fairfield, Connecticut; his beloved companion, Darlene Delozier; his mother, Janina “Babi” Brychcy, of Webster, N.Y.; his grandchildren, Landon P. Sweat and Logan R. Sweat; his siblings, Andy (Cindy) Brychcy, Paul Brychcy, Elizabeth “Brychcy” Holder; and several nieces and nephews. Condolences for the family may be left in our online guestbook at www.watsonhunt.com. Watson-Hunt Funeral Home has been entrusted with the arrangements.

Colonel Richard Brychcy, USAF, Retired, 68, of Perry, unexpectedly passed away on Tuesday, September 15, 2020. A Celebration of Life with Military Honors, will be held at Watson-Hunt Funeral Home on Saturday, September 19, 2020, at 11:00 a.m.... View Obituary & Service Information

The family of Colonel Richard Brychcy, USAF, Retired created this Life Tributes page to make it easy to share your memories.