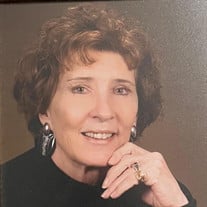 PERRY – Claudia A. Zimmerman, 77, formerly of Atlanta, passed away on February 16, 2022, with her family by her side. Born January 18, 1945, she was the daughter of the late Archie C. Allgire and Agnes L. Bremner. Left to cherish the memories they made are, her loving and devoted husband of nearly twelve years Charles “Chuck” Zimmerman of Perry; her loving daughters Bradley Jackson of Perry, Emily Nipper and husband Louis of Elko; their father William E. Jackson of Macon; her grandchildren, Dylan Jackson of Perry; Abigail Nipper Pickering and husband Coby of Perry and Jackson Nipper of Elko; her great grandchild Lawton Pickering of Perry; sister-in-law Johanna Rucker and husband Bill of Fairfax,Virginia; and various cousins, nieces and nephews. Claudia was preceded in death by her parents; her former husband, 1st Lt. William Zimmerman, Jr; her sister Jane Workmeister and brother-in-law, Lynn Workmeister. Claudia grew up as an "Army brat" and lived in Georgia, North Carolina, Japan, and Germany before her family eventually settled in Westminster, MD. She is a 1963 graduate of Francis Scott Key High School in Union Bridge, MD and also attended McDaniel College (previously Western Maryland College) in Westminster, MD. Claudia worked at Hutzler’s Department Store, Sears Roebuck, Delta Airlines, Bridal Shop of Furchott’s Department Store and Blackburn Tennis Center. Claudia moved to Atlanta where she spent over 40 years. She was an active member in the Bridge Club and Garden Club. Her hobbies included tennis, bridge, crafting, decorating, cooking, crossword puzzles and traveling. She was a beautiful woman with a flair for fashion, home decorations and renown for her ability to repair anything with a power tool or hammer and nails. She was known by family and friends to host magnificent gatherings and celebrations when given the chance. In 2019, Claudia and Chuck moved to Perry to be closer to her daughters and grandchildren. Claudia was the most caring, loving, cheerful lady you could ever meet. She dearly loved those around her, and she will be greatly missed by all of her friends and family. A Celebration of Life Service will be held at Watson-Hunt Funeral Home Friday February 25, 2022, at 1PM. Memorial contributions may be made to Alzheimer’s Association, 886 Mulberry Street, Macon, GA 31201. Condolences for the family may be left in the online guestbook at www.watsonhunt.com. Watson-Hunt Funeral Home has been entrusted with the arrangements.

PERRY &#8211; Claudia A. Zimmerman, 77, formerly of Atlanta, passed away on February 16, 2022, with her family by her side. Born January 18, 1945, she was the daughter of the late Archie C. Allgire and Agnes L. Bremner. Left to cherish the memories... View Obituary & Service Information

The family of CLAUDIA ZIMMERMAN created this Life Tributes page to make it easy to share your memories.

Send flowers to the ZIMMERMAN family.